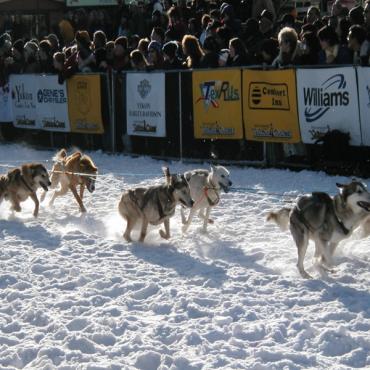 The Yukon Quest is known for excellence in canine care and fostering the traditions of northern travel by dog team.  The trail follows historic Gold Rush and mail delivery dog sledding routes from the turn of the 20th century. Yukon Quest dog teams compete over two weeks with mushers guiding their canine athletes across frozen rivers and lakes and over mountain summits in the heart of the Arctic winter through some of the most pristine wilderness remaining in North America.

The mushers, who must pack up to 250 lbs of equipment and provisions for themselves and the sled dogs, are permitted to drop sled dogs at checkpoints or dog drops but are not allowed to replace the sled and cannot accept any help until they reach Dawson City, Yukon, the halfway mark of the race. Ten checkpoints, some more than 200 miles apart, and 4 dog drops lie along the trail.