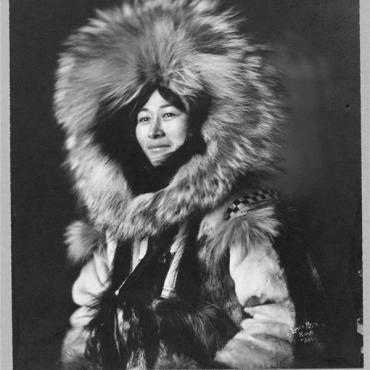 With a population of 4,500 and home to one of the world's largest Inupiat Eskimo settlements, Barrow is a mixture of traditional culture and modern ways.  While many every day conveniences exist, the subsistence life style is still very much in evidence and fishing, hunting, and whaling are mainstays.

North Slope oil discovery has brought wealth to the area, including modern influences such as snowmobiles, but it has been continuously occupied for 5,000 years by people who have learned how to live in the harsh arctic climate.

In fact, the Barrow area has probably the harshest weather in Alaska. Owing to its location 320 miles north of the Arctic Circle, Barrow's climate is cold and dry and is classified as a polar climate.

Temperatures remain below freezing from early October through late May. The high daily temperature is above freezing on an average of only 109 days per year.

The sun shines and never sets for 82 days from early May to early August and it is dark for 51 - 67 days (the sun never rises) between November and January.

Barrow is one of the top 100 birding spots in America. Although the diversity of birds is somewhat small, the annual visitors are spectacular. All four species of Eider ducks migrate along the coast and nest in the local tundra.  Barrow is the only spot in America that you can reliably expect to see the elusive Ross's gull which appear, sometimes in great numbers, during the last week of September through the first couple of weeks of October.

Although it is possible to see polar bears through out the year, October and November allow for the most likely viewing opportunities.

In late May and early October, the Eskimo natives hunt Bowhead whales which they've done since 800 A.D.  The size of the whale makes it an important part of the annual subsistence harvest. During whaling season there is every chance of witnessing a whale being brought in on the beach.  The communal nature of the hunt and the sharing of the whale give it a central place in the spiritual and physical culture of the region.

Sharing the whale with the whole community, and with other communities too, is an old and highly- valued practice. At the butchering site, the parts of the whale are divided among the whaling crews, with some shares reserved for elders and widows and other parts kept for festivals.