"Kirsty has kept us informed and has given us options on what to do regarding our 30th anniversary trip to Boston, New York and Washington in September." W.K. Gosport 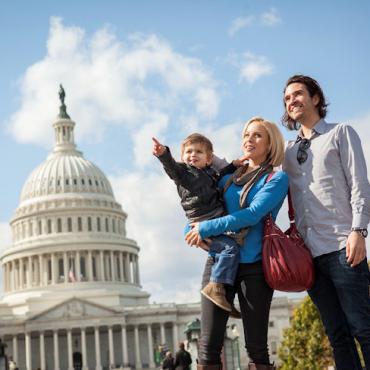 What an exciting time to take a holiday to Washington, DC! The movers and shakers, lobbyists and legislators help make the nation’s capital an eclectic experience packed with famous sites, cool restaurants and top shopping.  Alongside some of the world’s best known museums and galleries, the wide sweeping boulevards and symmetrical city layout allow the dramatic presentation of the visual crown jewels.  Foremost is the George Washington Monument, a 500 feet tall obelisk visible from 30 miles away, while the Lincoln Memorial celebrates the revered 16th President, seated and steady of gaze at the end of the National Mall.  Such sights add to the grandeur of Washington, DC and formed the backdrop to the historic inauguration of President Barack Obama when he assumed office before crowds over a million-strong. 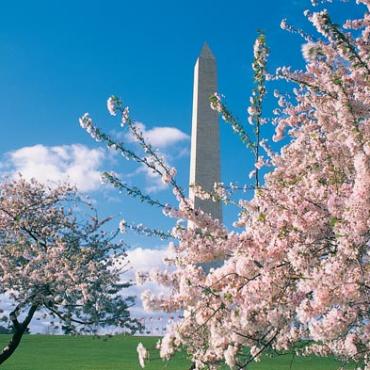 Start your Washington, DC holiday with a Gray Line tour from Union Station, itself a grand ceremonial building with upscale shopping, restaurants and bars.  The half day tour will familiarise you with the DC geography as you either drive by or step off and explore the city highlights such as the White House, the War Memorials, FBI Headquarters and Embassy Row. The major landmarks are predominantly linked by green spaces with foot and bike paths, making a Bike the Sights tour an ideal way for the more energetic to see the city. 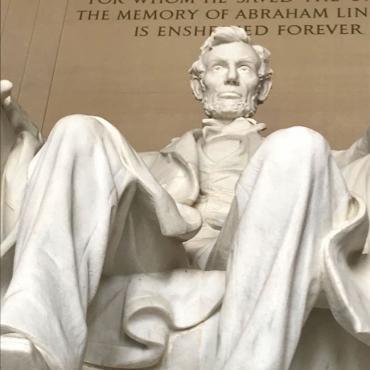 The central business district turns rather quiet when the government workers call it a day. This is the time to head for areas like Georgetown and Adams Morgan with their trendy eateries, wine bars, jazz clubs and late night book stores.
Bon Voyage have been providing tailor-made travel and holidays to Washington DC since 1979. Have your Washington, DC holidays expertly tailor-made by Bon Voyage to suit your exact requirements, with the quality and service you expect, and at great value prices.

Welcome to Washington DC, Maryland and Virginia, known collectively as the Capital Region, where state-of-the-art America meets its colonial past in scenically stunning surroundings.

In the Capital Region, there were more major Civil War battles fought than anywhere else in the US. Follow its history through more than 600 sites in Maryland and Virginia.

Enjoy the highlights of Pennsylvania and Washington DC with its deep American independence history and famous Amish culture.

A great opportunity to learn about the United States' past together with beautiful scenery, sweet towns and bustling city life.

The Scenic Byways of the Capital Region

America's most scenic and interesting routes have been designated Scenic Byways. The Capital Region of Washington DC, Maryland and Virginia are blessed with no fewer than eight of these.

Travel from Gettysburg to Charlottesville and discover the history that shaped the landscape of the country. You can also explore Washington DC and its famous museums and monuments.

A portrait of American history, this trip mixes the modern bustle of Washington, D.C., the simple Amish life of Lancaster County, and landmarks from the Revolutionary and Civil Wars.

From it's celebrated symbols of patriotism to it's undiscovered neighbourhoods, the sights and sounds of the nation's capital inspire millions of visitors every year. Packed with famous sights & attractions and an endless calendar...

Washington, DC has the most wonderful collection of monuments and public buildings, and a visit to the American capital has

The long streets and sweeping boulevards of Washington DC make it quite a walk between the famous sights and buildings.  That’s why

The Smithsonian Institution, the world's largest museum complex and research organisation is composed of 19 museums, 9 research centers and the National Zoo.  Extraordinarily admission to them all is FREE.

Manassas Battlefield National Park spreads on grassy hills at the western fringes of the Washington DC. You don't have to know what happened here to feel the power of these brooding hillsides.

View DC from a different angle and top up your tan at the same time!

The International Spy Museum is the only public museum in the United States solely dedicated to espionage and the only one in the world to provide a global perspective on an all-but-invisible profession that has shaped history and continues to...

Tysons Corner Center is of the TOP 10 shopping malls in the whole of the USA.  And for good reason!

Since 1930, the Omni Shoreham has played host to presidents and world leaders making it a true historic landmark.