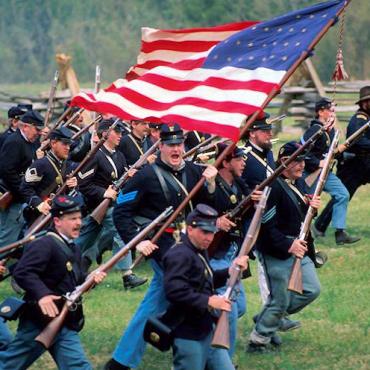 Manassas Battlefield National Park spreads on grassy hills at the western fringes of  Washington DC. You don't have to know what happened here to feel the power of these brooding hillsides.

Soon after the first shots were fired in Fort Sumter, the first major land battle of the Civil War, known as the Battle of Bull Run, was fought here on the morning of July 21st 1861. Expecting an easy victory, some 25,000 Union troops attached a Confederate troop that controlled an important railroad link into Shenandoah Valley. The rebels proved powerful opponents, and their mighty strength in battle earned their Commander, General Jackson, the nickname "Stonewall".  Pop into the visitor centre to learn more about the battles fought here.

Just a short drive from Washington DC is Fredericksburg, one of Virginia's prettiest historic towns. In colonial days, this was an important inland port. You'll love strolling along the 18th and 19th century buildings along the waterfront that now house antique stores and quirky bookshops.

Fredericksburg's important strategic location made it vital during the Civil War. and the land around the town was heavily fought over. Over 100,000 men lost their lives in the major battles in Fredericksburg, Chancellorsville and Spotsylvania. The Fredericksburg and Spotsylvania National Battlefield Park, just south of the town has informative exhibits and offers audio tours of the battlefield sites.