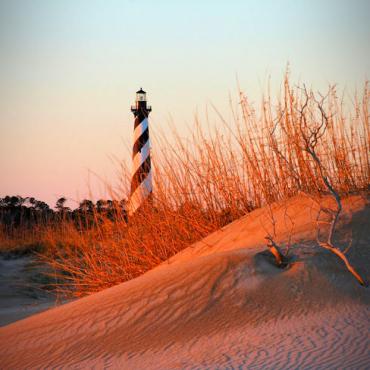 It is said that America begins on North Carolina's Outer Bank, the site of the first English colony in the New World – the so-called “Lost Colony” on Roanoke Island.  This chain of natural barrier islands stretches for 200 miles and have marked a number of significant firsts.  On Kitty Hawk Field at 10.35am on 14 December 1903, Orville Wright - a bicycle maker from Ohio – flew his rather primitive aero plane for 12 seconds and touched down 120ft away, constituting man’s first powered flight. The very spot is marked by a granite pylon and a small museum at the Wright Brothers National Memorial.

The Charming Carolinas - North and South

This tour of the Carolinas and the charms of Savannah will take you on a journey through fascinating history, wonderful beaches, grand plantation homes, quaint hamlets and incredible Smoky Mountain scenery.

Savour the diversity and hospitality of both North and South Carolina on this leisurely fly-drive, including the cities of Charlotte and Charleston.

Only In America - In search of the legendary Blackbeard's Treasure

From the Wright Brothers to ‘moonshine’ North Carolina has a vibrant history and has become home to a variety of colourful characters including the fearsome Edward Teach, known as Blackbeard.

The Sanderling Resort & Spa on North Carolina 's Outer Banks touches the shores of both the majestic Atlantic Ocean and the serene Currituck Sound.

Located right on the waterfront in charming Manteo, on the beautiful string of Islands known as the Outer Banks.

A little gem of a Lodge located on charming Ocracoke Island.