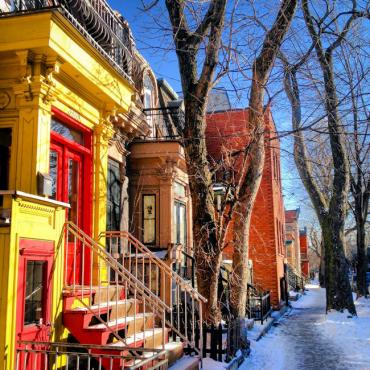 Surrounded by water and brightened by 650 parks and green spaces, Montréal's island city is many cities in one. The second largest French-speaking city in the world, a holiday to Montréal offers a great combination of old world charm and big city excitement.  Founded by French explorers more than 350 years ago, the "Paris of North America" is among the oldest cities on the continent, its history a rich backdrop to its vibrant multicultural life.

Being at the confluence of both French and the English traditions, Montreal has developed a unique and distinguished cultural face.  Montreal is Canada's centre for French language television productions, radio, theatre, film, multimedia and print publishing.  As a North American city, Montreal shares many cultural characteristics with the rest of the continent. It has a tradition of popular jazz and rock music and has produced much talent in the fields of visual arts, theatre, music, and dance.

Another distinctive characteristic of Montreal cultural life is to be found in the animation of its downtown, particularly during summer, when Montreal flourishes enlivened by festivals, street fairs and innumerable terrace cafés.

The city's largest festival is the Just for Laughs comedy festival, which is the largest in the world of its kind. Other popular festivals include the Montreal International Jazz Festival, the Francofolies and the Montreal Fireworks Festival.

Bon Voyage have been providing tailor-made travel and holidays to Montreal in Canada since 1979. Have your Montreal holidays expertly tailor-made by Bon Voyage to suit your exact requirements, with the quality and service you expect, and at great value prices.

The most famous aspect of shopping in Montreal is the Underground City.  Officially called RÉSO or La Ville Souterraine, the “city” is a set of interconnected complexes above and below ground throughout downtown Montreal.

Montreal's Notre-Dame Basilica has nothing in common with Paris's except the name. The neo-gothic building dates from 1829

The Olympic Stadium was purpose built for Montreal's 1976 Olympics.  As construction was well underway, a labour strike caused a major delay to the building of the tower and the Olympics began with a half-finished stadium.

Led by certified professionals - any of the guided tours on offer are sure to be informative and entertaining.

Montreal puts its green foot forward by offering cyclists more than 450 kilometres of bike paths to choose from.

At the centre of Montréal's vibrant cultural and commercial district sits the city's grandest and most gracious hotel - Fairmont The Queen Elizabeth.