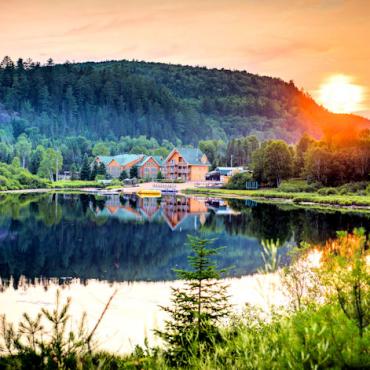 Quebec is Canada's largest province by area and the only Canadian province with a predominantly French-speaking population whose sole official language is French at the provincial level.

Nationalism plays a large role in the politics of Quebec and all three major provincial political parties have sought greater autonomy for Quebec and recognition of its unique status.  In 2006, the Canadian House of Commons passed a symbolic motion recognizing the "Québécois as a nation within a united Canada.”

Québec is an immense territory that occupies the north-eastern most corner of North America.  Quebec is bordered to the west by the province of Ontario and Hudson Bay, to the north by Hudson Strait and to the east by the Gulf of Saint Lawrence and the provinces of Newfoundland and Labrador and New Brunswick. It is bordered on the south by the U.S. states of Maine, New Hampshire, Vermont, and New York.

Less than seven hours from home will have you discovering this unique province brimming with gorgeous scenery, fascinating cities, yummy local cuisine and outdoor adventure galore!

Montreal's Notre-Dame Basilica has nothing in common with Paris's except the name. The neo-gothic building dates from 1829

A short drive north of Mont Tremblant set in one of Quebec’s most picturesque landscapes is Blueberry Lake Resort in the heart of the Laurentian Mountains.

Nestled majestically between the sea and the mountains, the Fairmont Le Manoir Richelieu is a vision of historical splendor. Rich in tradition, this exquisite paragon of hospitality blends the quiet charm of the countryside with the sophistication of a world-class resort.