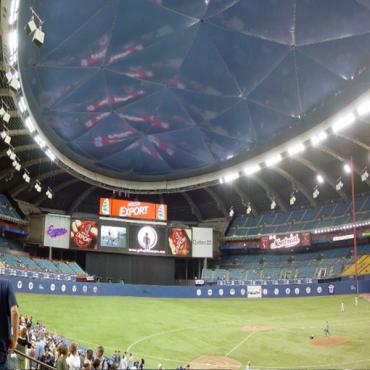 The Olympic Stadium was purpose built for Montreal's 1976 Olympics.  As construction was well underway, a labour strike caused a major delay to the building of the tower and the Olympics began with a half-finished stadium.  The roof languished in a warehouse in France until 1982. It was not until 1987, over a decade later, that both the tower and roof were finished, officially completing construction of the stadium as originally designed. It is still used today for sports events and major concerts.

La tour de Montréal, the tower incorporated into the base of the stadium, is the tallest inclined tower in the world at over 550 feet and is a member of the World Federation of Great Towers. Visitors can experience the tower by elevator to a lookout on top.

The stadium is one of Montreal's most curious pieces of architecture and is accompanied by the Biodome, a building originally used as a velodrome during the Games.  It's now an attraction where visitors can walk through replicas of the four eco-systems of the Americas.  Each eco-system features the fauna and flora one could expect to see and each section is also temperature controlled: from the humid tropical forest of South America to the frigid climate of the Polar Regions.