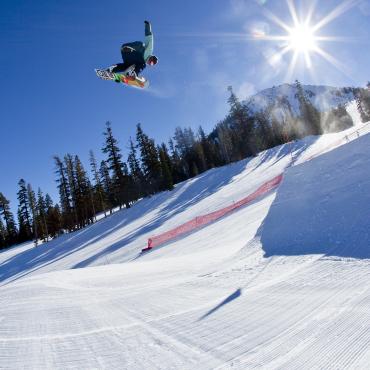 One of the legendary ski resorts in the USA, Mammoth Mountain truly is at the Top of California. Sitting above 3,300 meters, Mammoth Mountain boasts one of the longest ski seasons in North America, usually opening the first half of November, and skiing well into June. It isn’t unusual to be skiing in a t-shirt or bikini on the 4th of July! With an annual snowpack of 10 meters plus, a ski terrain exceeding 1,500 hectares, and 28 chair lifts and gondolas to choose from, it’s easy to see why Mammoth Mountain should be on everybody’s winter “bucket list.” With 150 different runs, Mammoth Mountain has plenty of terrain for all ability levels, from beginners and cruisers to cliff-jumping experts. 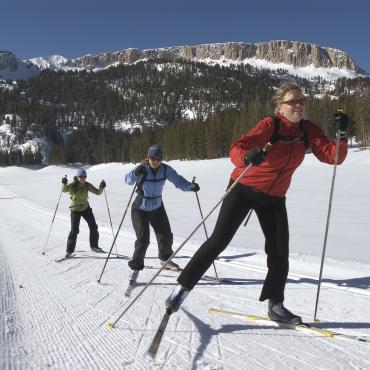 Don’t forget your sunscreen, as Mammoth Mountain enjoys more than 300 days of sunshine a year, which makes the odds very good for bluebird, powder days on the slopes, and a goggle tan on your face when you get home.

Mammoth Mountain is the official training mountain for the US Olympic Snowboard and Freestyle teams. You can improve your skills on one of Mammoth Mountain’s eight terrain parks. Children and aspiring adults can play around in Mammoth Mountain’s beginner parks, while the fearless rippers land big air in the Olympic-level superpipe and slopestyle jumps.

The Town of Mammoth Lakes sits at the base of Mammoth Mountain, and while the town has kept its soul from its 1880’s western heritage, Mammoth Lakes offers travellers all the amenities of the modern world. An outlet shopping mall, grocery stores, a movie theatre, a pedestrian walking plaza, parks and creeks, a community college, a full service hospital, and one of California’s best self-guided walking trail system are found in Mammoth Lakes.
Access to Mammoth Lakes is amazingly easy. The Mammoth/ Yosemite airport (MMH) sits less than 8 km away from the downtown area, and flight service connects Mammoth Lakes with San Francisco, Los Angeles, San Diego, Denver and Las Vegas. Combine a ski trip on Mammoth Mountain with the beach, the Strip, or Disneyland for the vacation of a lifetime!
Most lodging options in Mammoth Lakes offer free shuttle service to and from the airport, and once in Mammoth Lakes, the free ski bus network can get you anywhere in town or on the ski hill. 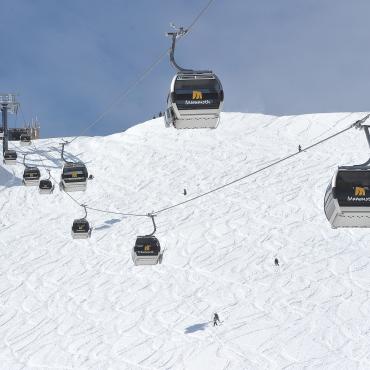 A year-round adventurer’s mecca, Mammoth Lakes has something for everyone, any season of the year. Winter sports enthusiasts can enjoy a wide variety of activities in Mammoth Lakes after playing on the ski hill. Get your adrenaline fix snow- tubing at the Tubing Park, where six lanes of high-speed good times await. Prefer something more traditional? Ice skating at the Town’s ice rink or dog sledding in the beautiful Sierra Nevada Mountains with a team of energized Huskies is waiting for you. A memorable workout can be had cross-country skiing on one of the 32 km of groomed trails at the Tamarack XC Ski Center located a quick 5 minutes above Mammoth Lakes, or go full throttle with guided snowmobile.

Call Bon Voyage to include Mammoth in your fly- drive holiday to California.

The perfect combination of city and the out-of-doors. San Francisco plus the beautiful Californian wilderness!

This escorted holidays combines all of the best and unique National Parks California has to offer from Kings Canyon and Sequoia National Park to stargazing and learning about early life in the Sierras, Mammoth Lakes and Death Valley.

The Village at Mammoth

A quiet slope side property that features only condominium style rooms with the feel of a full service hotel.

The lodge's one-of-a-kind lake location is one of the last developed areas before paved roads give way to pure wilderness. Mountain bliss.