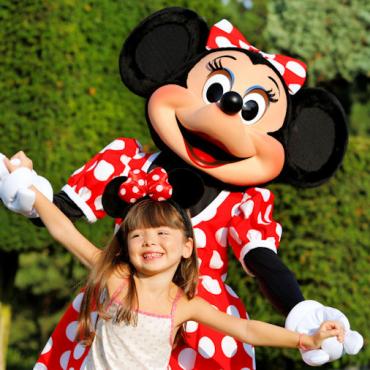 Did you realise that Disneyland® Park is where ALL the magic began in 1955? Experience more than 60 adventures and attractions across eight themed lands, and of course, Main Street U.S.A.  Whilst there are plenty of thrills to be had, you’ll also enjoy classics like It’s a Small World, Mad Tea Party, Mr. Toad’s Wild Ride, Jungle Cruise and Peter Pan’s Flight.

Walt Disney was 53 when he dedicated Disneyland Park and saw the realisation of his dream. Opening day was 17th July 1955 and the area was in the middle of a heatwave.  The first day was a bit of a disaster as a local plumbers' strike created challenges with water in the park.  The heatwave continued and almost wiped out the park that first summer.  Luckily, it all turned a corner and by 1965, 50 million visitors had come through the gates.

When it's time to take a break from all the action, you'll want a full-service resort with a cool pool to retreat to.

Step into a world of make believe, a fantasy world of fairy tales and childhood dreams come true! – the magical world of Disney at the Disneyland Resort in California.

There's only one choice if you are visiting Disneyland.  The extra benefits and amenities of a Disney property are second to none.

If the rooftop pool and waterslide don't please the family, the extra Disney perks certainly will.

Great value only one mile from the park.