We had a holiday of a lifetime and recognise that you put together an informed itinerary of accommodation variety, realistic travelling distances and good hotels.

“You could live in San Francisco a month and ask no greater entertainment than walking through it.” - Inez Haynes Irwin


San Francisco has garnered a reputation for being everybody’s favourite city and with good reason. Like so many big cities in America, it has a number of diverse neighbourhoods, plenty of star attractions, amazing restaurants and so easy to explore on foot. 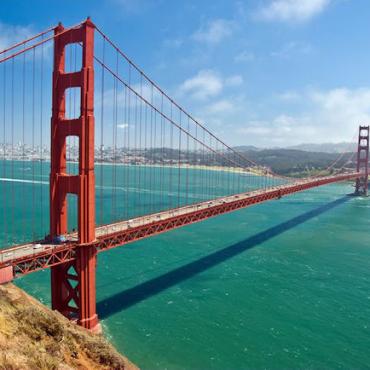 What sets San Fran apart from other US cities?  Possibly the romance of cable cars or the incredible expanse of Golden Gate Bridge.  The first glimpse of Alcatraz Island or the unbelievable turns of Lombard Street.  One thing is for sure, there isn't a US city quite like it.  Founded in 1776 by Spanish colonists, it was the California Gold Rush of 1849 that put the city on the map - making it the largest city on the West Coast at the time.  Seventy-five percent of the city was destroyed by the 1906 earthquake and fire, but was quickly rebuilt. During World War II, San Francisco was a major port of embarkation for service members shipping out to the Pacific Theatre. In 1945, it was the birthplace of the United Nations.

During the 1960s/70s, the rise of the hippie counterculture grew from opposition to USA's involvement in the Vietnam War.  The Summer of Love cemented San Francisco as a centre of liberal activism in the United States.  So much of this history is still evident today.  Hotels, for instance, taken over during WW II to house soldiers as they departed and returned from the Pacific.  The Haight-Ashbury district, host of the Summer of Love, is still as hippie today as it was then.

Then there's the almost eerie Alcatraz Island off in the distance.  It was developed for use as a lighthouse, a military fortification and military prison.  From 1934 until 1963, it was used as a federal prison, specifically housing inmates that had been troublesome at other prisons and were notorious for bank robbery and murder - one of the most infamous being Al Capone.

The Bon Voyage team knows this city inside and out, so we can recommend how to make the most of your time here and what best to combine with it.  It's an ideal starting point for a California Coast fly-drive or a stop on your way to the Hawaiian Islands.

Sample the best of America's west coastline from the California Coast to the rugged Oregon wilderness, taking in some of the best landscape scenery and cities in the area.

Explore the Californian landscapes from the rugged North Coast to the stunning Yosemite National Park and the miles of golden beaches in between.

Explore Yosemite on a three-day camping trip that takes you off the beaten path to trails and sights unseen by most who venture into America's favourite national park.

Hands down, one of the world's most beautiful stretches of coastline lies between Northern California and Oregon.

A sampling of Seattle, the beautiful Oregon coast, and the California wine country make this magnificent journey along the Pacific Coast one you'll remember.

The Hawaiian Islands of Maui, Kauai plus San Francisco

The heavenly, tropical Islands of Hawaii and San Francisco. You won't want to come home from this Pacific Ocean paradise.

The Northern Explorer gives you the opportunity to see the rugged Northwest States from the comfort of your train, including Chicago, Seattle and San Francisco.

Following the wagon tracks of the great pioneers, the Zephyr is the flagship of Amtrak's fleet, a super liner with an all-window panoramic lounge car and a tick list of iconic Americana.

Take the roads less travelled on this fly-drive through Utah, Nevada and California.

Three great holidays all wrapped into one, sampling some iconic USA. Enjoy Orlando attractions, the bright lights of Vegas and explore San Francisco.

This San Francisco Harley-Davidson holiday begins with a three day ride along the beautiful Pacific Ocean down the historic Pacific Coast Highway.

On this luxury two centre holiday to Las Vegas and San Francisco you'll enjoy the delights of the Beautiful City On The Bay, mixed with the glitz and glamour of wonderfully outrageous Las Vegas.

Experience the best of the Golden State on this leisurely paced motorhome holiday.

Iconic cities, scenic drives and jaw-dropping national parks are the order of the day on this exciting exciting Motorhome Adventure!.

Start in the Pacific Northwest state of Washington and travel the length of the USA's Pacific Coast.

Experience a holiday off the beaten path on this motorhome adventure through undiscovered Northern California and Oregon. Discover dramatic coastlines and deserted beaches, towering mountain ranges and areas of pristine wilderness as you journey...

Located less than two miles offshore from San Francisco, it's an imposing and intriguing sight.

One of the USA's most famous streets.

An urban park with one incredible backdrop!

The largest and most established Chinatown outside of Asia.......

The Waterfront in San Francisco

Home to lively Fisherman’s Wharf, Pier 39 (with it's resident sea lions) and the exquisitely restored...read more

It started with a donation and a desire to save Mother Nature's incredible redwoods.

Located in Northern California, about 50 miles northeast of San Francisco, the Napa Valley is one of the top wine growing...

Take the ferry to enchanting Angel Island, the largest Island in San Francisco Bay and formerly the "Ellis Island of the west.

One of the best swimming beaches in Northern California.

This tour departs from Fisherman's Wharf, passing through the Marina district with a brief photo stop at the

Bike and Roll- Across The Golden Gate Bridge, San Francisco

Everyone can enjoy this thrilling excursion!

Take a ride from Powell and Market Streets on one of only ...read more

"The Redwoods, once seen, leave a mark or create a vision that stays with you always...

Just over an hour's drive from San Francisco is pretty Bodega Bay.  Explore this seaside town where Alfred Hitchcock filmed his classic, The Birds. Treat yourself to lunch at the luxury Bodega Bay Lodge and Spa or stroll around the...

The glorious Lake Shasta area is only 12 miles north of Redding.  The region has the largest nesting population

Head north-east from San Francisco towards the High Sierras and you’ll come to Lake Tahoe - the second highest alpine lake in the world. At its northern end is the historic town of Truckee; a home of many outdoor sports video producers… and...

To the southern end of Tahoe, more ski slopes abound in winter while in summer you’ll find yet another stunning choice of back country and waterborne activities

This day tour includes the scenic views from the Coastal Highway, a stop in Monterey, a 17 mile drive including...

Yosemite camping made easy.  Full guided and all the equipment you'll need......

An architectural gem with contemporary decor and large rooms for San Fran.  As part of the Viceroy Hotel Group, you know it's something a bit special.

Right in the heart of the downtown, this luxury property is located on floors five to 17 of the 42-storey building, creating a sophisticated sanctuary above street level.

This Beat-themed boutique set in the popular Union Square area is a real charmer. From the alluring retro-style bar, to cosy rooms and welcoming staff.

Bohemian and edgy, with fantastic service and superb Union Square/Theatre District location.  Another gem in the Viceroy family.

A Fisherman's Wharf treasure with so much character you can almost touch it.

Delightfully eclectic hotel with a proper host of included amenities.

Historic, iconic, vintage, classic - since 1928.  Oh, the stories these walls could tell.

Perched on Nob Hill, the views from this grand hotel are unbeatable.

Hidden away on three verdant acres overlooking the idyllic Napa River, discover a place unlike any other Napa hotel. Here you will encounter five-star luxury that emphasises thoroughly sophisticated service and style in a truly tranquil, intimate ambience.

This Relais & Chateaux property is the epitome of Napa luxury offering a perfect blend of style, service and spa.

Occupying a Victorian-style farmhouse, and set next to the Beringer Vineyards in pretty St Helena, its award-winning restaurant, Acacia House, is helmed by Top Chef Master Chris Cosentino.

This impressive resort offers spacious rooms set among attractively landscaped grounds. Countless Napa and Sonoma Valley wineries are within an easy drive. An on-demand shuttle runs throughout the day to nearby Sonoma Plaza, bustling with wine tasting rooms, shops and eateries.