Ottawa is Canada's capital. At the head of the city, rising dramatically on a bluff overlooking the Ottawa River are the stately Parliament Buildings, seat of the government of Canada.

On December 31, 1857, Queen Victoria was asked to choose a common capital for the two provinces of Canada (modern Quebec and Ontario) and chose Ottawa. There are old folk tales about how she made the choice, but they have no historical basis simply illustrate how arbitrary the choice of Ottawa seemed to Canadians at the time.

In fact, the Queen's advisers suggested she pick Ottawa for many important reasons: first, it was the only settlement of any significant size located right on the border of Ontario and Quebec making it a compromise between the two colonies and their French and English populations; second, the War of 1812 had shown how vulnerable major Canadian cities were to American attack, since they were all located very close to the border while Ottawa was (then) surrounded by a dense forest far from the border; third, Ottawa was at a point nearly exactly midway between Toronto and Quebec City and the small size of the town made it less likely that politically motivated mobs could go on a rampage and destroy government buildings. 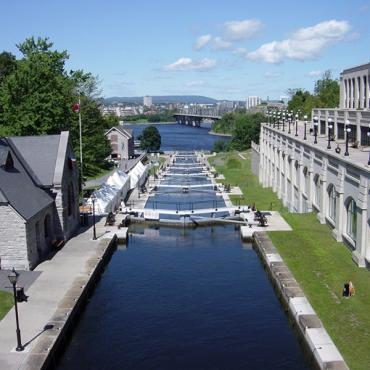 Today, Ottawa is one of the most beautiful G8 capitals in the world; rich in culture and heritage with its many national institutions, parklands, waterways and historic architecture. It is home to a large number of foreign embassies and is a recognized centre for both academics and professional training. The city offers an open and welcoming environment to cultures from around the world, providing service in English, French, and a host of other languages. The city’s residents enjoy an enviable quality of life that is recognized around the world.

Central among the city's attractions is the Rideau Canal.  The canal was opened in 1832 as protection against American aggression and is still in use today, with most of its original structures intact.  It is the oldest continuously operated canal system in North America.  By summer a lazy cruise down the canal is a delightful way to travel through the heart of the city and in winter the canal becomes the world's longest skating rink. 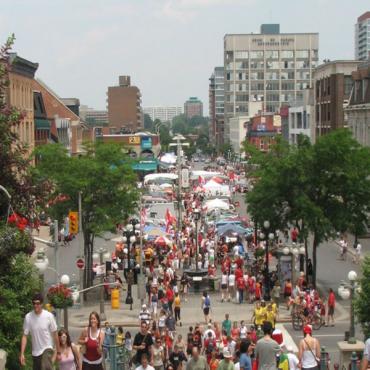 Visit Byward Market for wine bars and farmers' stalls loaded with flowers and fresh produce.  Sample a "beavertail,” a deep-fried sweet pastry shaped like a beaver's tail. During the Canadian Tulip Festival in May, the city's gardens blaze with over three million tulips commemorating Canada's aid to Holland during World War II. And there's no better place to be than the country's capital for the July 1st celebrations of Canada Day.

Bon Voyage have been providing tailor-made travel and holidays to Ottawa in Canada since 1979. Have your Ottawa holidays expertly tailor-made by Bon Voyage to suit your exact requirements, with the quality and service you expect, and at great value prices.

Reflecting the confidence, dignity and style of Ottawa, Fairmont Château Laurier stands as a testament to this dynamic, thriving city.

Set in a funky modern building and a 7-minute walk from the buzzy ByWard Market Square, this polished hotel is half a mile Parliament Hill, close to the restaurants and shops of downtown.

Swanky hotel in a prime area of Ottawa and home to Ottawa's tallest rooftop lounge - checkout the views!