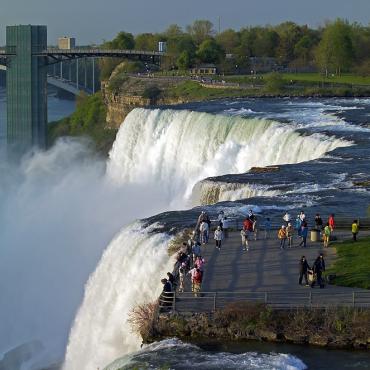 There is something about a holiday to Niagara Falls that appeals to the lover, daredevil and poet in everyone. Over the years Niagara Falls has evolved from a strategic military post to a prosperous trade centre and finally into a world class year-round holiday destination.
Niagara Falls is actually made up of three waterfalls, in two major sections, separated by Goat Island. Horseshoe Falls, by far the largest and arguably most impressive, is on the Canadian side.  However, the US lays claim to two falls - American Falls and Bridal Veil Falls.

Niagara Falls are not the highest falls in North America. At just over 176 feet it fails the vertical challenge when compared to Yosemite Falls, for instance, which towers more than 2,400 feet.  But, don’t underestimate Niagara Falls because it more than makes up for it in volume. More than 700,000 gallons of water per second pour over Niagara Falls, rushing over at about 25 miles per hour. That makes Niagara Falls the largest in North America by volume and by width. It truly is a sight to behold. 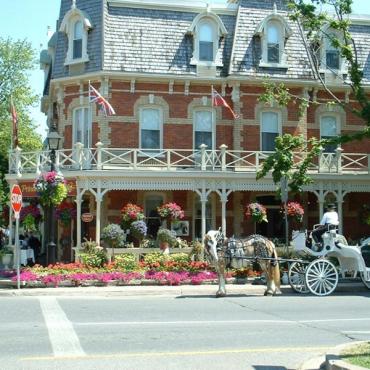 About 30 minutes from the falls, you'll find quaint Niagara-on-the-Lake. This town has retained its 19th century charm and is properly chocolate box sweet!  Queen Street is brimming with dining and shopping options.
It's a wonderful base to explore Niagara wine country from.

From its' humble beginnings over 100 years ago, Niagara is now producing some of the finest wines in Canada. A revolution of planting and growing methods have ushered Niagara wines to the international forefront. Within a short drive of Niagara Falls & Niagara-on-the-Lake visitors can discover dozens of wineries along Niagara's Wine Route.  Can we suggest the icewine?  Ontario is the perfect region for producing this liquid gold.

This rail journey invites you to travel in luxury from Toronto’s urban excitement, through a diversity of landscapes to the metropolitan gem, Vancouver.

Lakeside Adventure is a true family affair, destinations and scenery to thrill, inspire and invigorate both young and old.

The majestic palisades of the Hudson River, the lush greenery of the Adirondacks and the sparkling waters of Lake George serve as a backdrop for this timeless journey through Upstate New York.

The Old Stone Inn is a historic, charming boutique hotel in the heart of Niagara Falls.

Sheraton on the Falls

At this Crowne Plaza hotel you will enjoy the opulence of the original 1920's architecture and decor with all the conveniences of a modern first class hotel....