In 1882, guided by a Stoney Indian, Tom Wilson became the first white man to discover what native Indians called "Lake of Little Fishes". He named his discovery Emerald Lake, but it was later changed by the Geographic Board to Lake Louise in honour of Princess Louise Caroline Alberta, fourth daughter of Queen Victoria.

Cosy and close to nature, Lake Louise has been called the ultimate "get away from it all" destination. Not only have international royalty, Hollywood stars and heads of state come to Lake Louise to relax, but increasingly the rest of the world is discovering its simple charms as well. Romantic and relaxing the pace in Lake Louise attracts people who want to savour the finer things of life; a good book in front of a fireplace, the stillness of the outdoors, or a quiet walk after dinner. 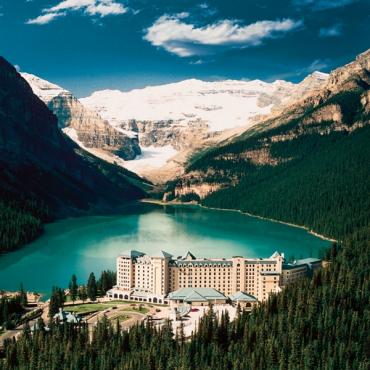 There's a lower village with a vast array of fine dining, first class accommodation and shopping. The lower village of Lake Louise is south of the Trans-Canada Highway in the Bow River valley. The Lake Louise Visitor Center features exhibits on the human and natural history of the area. The centre also provides current information on trails and interpretive programs.

Up the hill the Chateau Lake Louise presents lake-side views of the towering Victoria Glacier offering old-world charm and elegance amidst the wilderness. Lake Louise, with its blue-green water set against the stark backdrop of Victoria Glacier, is probably the most beloved and most photographed scene in the Canadian Rockies.

Legendary, luxurious property perched on the edge of one of the world's most photographed lakes, Lake Louise, 30 minute drive from Banff.

A charming and historic lodge, just a 5 minute walk to stunning Lake Louise.