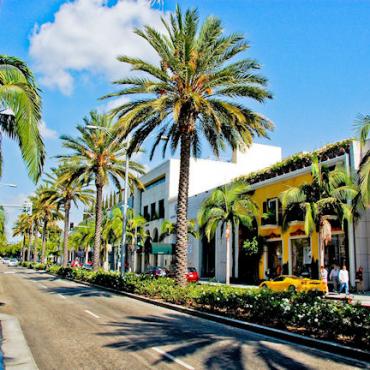 In 1900, the Amalgamated Oil Company commissioned a round of oil exploration in the area known today as Beverly Hills.  After many unproductive attempts, they reorganised as the Rodeo Land and Water Company in 1906 and renamed the land Beverly Hills after Beverly Farms, Massachusetts.  The city's first streets, including swanky Rodeo, were constructed in 1907.

To further stimulate development, the Beverly Hills Hotel was constructed in 1912 and became the centre of community life.  Beverly Hills, the city, was incorporated in 1914. It might have been just another city outside Los Angeles, but the hotel brought a touch of elegance to the area and the movie stars of the day took notice.  In 1919, Douglas Fairbanks and Mary Pickford led the wave with their redesigned hunting lodge turned mansion, named Pickfair.  Hollywood’s A-list soon followed with the likes of Gloria Swanson, Will Rogers, Charlie Chaplin, John Barrymore, Buster Keaton, Clara Bow and Rudolph Valentino erecting their own mansions and estates.

The rest as they say…....Today, Beverly Hills is one of the world's most luxurious shopping areas, full of hotels you'll recognise from the movies and, of course, plenty of the rich and famous.

Venice is just plain cool. A short bike ride from Santa Monica this "Venice of America" has attracted visitors for years to its canals and crooked streets.

Your own private hideaway minutes from the buzz of downtown Beverly Hills.

Opened in 1955 by Conrad Hilton, this hotel perfectly combines the excitement of Hollywood with the elegance of Beverly Hills.

Set in 12 tropical acres, this iconic hotel is one of the most beautiful, romantic, and exclusive hotels in the world.