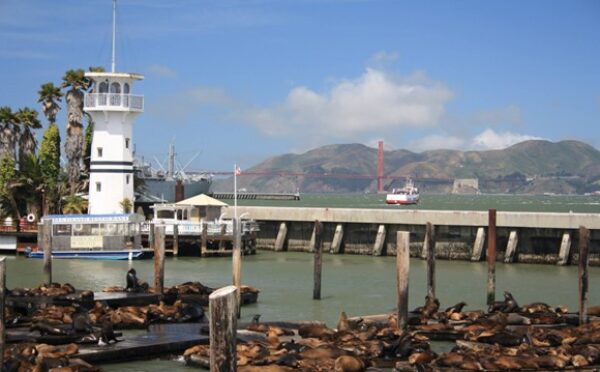 The people of San Francisco are unapologetic, open-minded, freethinkers. Only in San Francisco are you met at the airport by a 28-pound rabbit named ‘Alex the Great.’ along with his fellow Wag Brigade made up of adorable dogs and a pig called Lilou, helping travellers to forget about their worries for a brief moment. San Francisco people love a bold and brave statement. The new terminal at SFO is a testament to this, named after the famed civil rights activist Harvey Milk it’s a beautiful addition. Currently accessible when flying with Virgin, British Airways, and eventually United airlines, it certainly causes controversy with the lesser liberal American States.

Our hotel for the evening is located on Nob Hill. One of the highest and most elegant districts in San Francisco, once mansions for the wealthy San Francisco families these historical gems are now pillars of the community. We love the Stanford Court or Fairmont and recommend booking a high floor with Bay views, or heading to the highest restaurant in San Francisco – The Top of the Mark offering 360-degree views of the city, soon to be restored to its former 1920s grandeur. The wealthy families of the day would gather here and watch as their husbands and partners deploy from the naval dock below.

The Marine district became a firm favourite with locals because of the alfresco dining and bars. Visit in the evening when the fairy lights are twinkling and the atmosphere is vibrant and lively, and sample some of the best chefs in San Francisco. Amongst them is the Dorian –  delicious food, attentive staff, and the best martinis. Finish the evening at Club Fugazi, located in North Beach and experience intimate theatre at its finest, telling the story of San Francisco through contemporary circus, I soon saw why this show is internationally celebrated. Creative, moving, and full of death-defying acrobatics. I guarantee you will be left in awe of the cast.

Sitting on the dock watching the sea lions playfully wrestling each other off the marina provides hours of entertainment. Fisherman’s Wharf has an abundance of souvenir shops and some of the best seafood restaurants in the city. The Fog Harbor Fish House with its panoramic views of Alcatraz and the Golden Gate Bridge is well worth a visit. Try Dungeness Crab available from November, it’s a favourite with the locals who associate it with the holidays. Book a trip to Alcatraz and always remember to reconfirm your ticket.

We were lucky enough to stumble upon an enthusiastic Uber driver one evening, happy to take us all on a quick tour before heading home. First stop, The Palace of Fine Arts a historical monument sitting on a serene lagoon, restored in 2010 has become a favourite place among locals. The best time to visit is in the evening, lit up by floodlights from below. The light reflects from the lake, casting shadows over the monument and the result is breathtaking. Alternatively, an early morning walk is the best remedy to jetlag.

After taking a few too many selfies, we headed home, passing by the famous Mrs. Doubtfire’s house. We made it to our hotel for the evening – The Stanford Court. Remember the best views on Nob Hill are up high. I recommend requesting an odd room number at Stanford. You’ll see why…

All that fresh sea air and hiking work up an appetite. You’ll definitely need one for this next stop. The historical ferry building is located at Embarcadero. A vibrant gathering of local farmers, artisan producers, and independently owned vendors. You can skip from clam chowder to ice cream and macarons in a matter of minutes. It’s a foodie’s paradise. I recommend Hog Island for oysters, Bluebottle Coffee, and Humphreys Ice Cream. I love their bourbon and vanilla flavour it’s heaven!

Hire bikes and if you’re feeling energic cycle the path that runs over the Golden Gate Bridge to Sausalito. Start off early and you’ll make it for lunch. Take the ferry back to Fisherman’s Wharf passing by Alcatraz. It’s a particularly wonderful day for an adventurous family.

A must-do for families and lovers of the outdoors is the Golden Gate Park. Offering the perfect refuge away from the big city. You can spend the whole day wandering between the Japanese Tea Gardens, Conservatory of Flowers, and De Young Art Museum. Take a picnic and watch the world go by at Stow Lake and Strawberry Hill. Pop into the Academy of Science among the largest museums of natural history in the world.

Finally, drop by the Painted ladies and Lombard Street for those classic San Francisco photos and you’ve made it! some of the best and most wonderful points of the city on the Bay.

Personally, I always need more time in San Francisco but that’s just a testament to how much I adore this city, for me it’s back to the airport for my flight and back into work at Bon Voyage to make everyone jealous when they hear the stories of my trip!