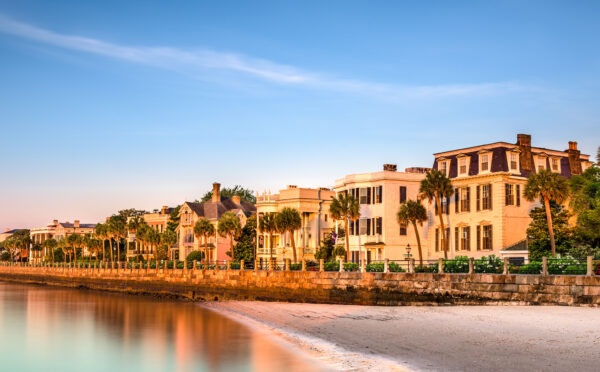 Read Bill Bryson’s classic travelogue ‘The Lost Continent’ (Secker and Warburg) and you will find he can be both hilarious and rude about certain places in America.  He pours affectionate scorn on his home
town of Des Moines, Iowa and is none too complimentary about Carbondale, Illinois.  But when his road trip brings him to Charleston, he waxes lyrical: “I had thought that Savannah was the most becoming American city I had ever seen, but it thumped into second place soon after my arrival in Charleston.”  Bill loved the harbour, the promontory packed solid with beautiful old homes and the peaceful streets.  “I was enchanted,” he concludes.

And Mr Bryson is not alone in his admiration.  Centuries earlier the Marquis de Lafayette, the French aristocrat and military officer who fought in the American Revolutionary War, gave his verdict: “Charleston is perhaps the best built, handsomest, and most agreeable city that I have seen.”

With its beautiful gardens, vibrantly painted Georgian houses along Rainbow Row, and carriages clacking across cobblestone streets, Charleston has long been considered one of America’s most charming cities. But, underneath its sleepy veneer, the city is known for its eclectic food offerings, a thriving theatre and cultural scene, bustling King Street, and historic City Market. An evening stroll along The Battery is the perfect way to end the day.

A guided walking tour is an ideal introduction.  You’ll learn about the city’s colonial past and how the first decisive victory of the Revolutionary War was fought in Charleston’s harbour. During the golden age of cotton, Charleston became the wealthiest city in the country but the shadow cast by imported slave labour is also an important part of the story.

Spring and autumn are ideal times to visit and Bon Voyage can tailor a fly/drive holiday to include Charleston and the Carolinas or south to include Bill Bryson’s second favourite city, Savannah in Georgia.
There are also a range of escorted tours that take in Charleston and you’ll find ideas and inspiration at
our website.

The latest addition to our offerings is ‘Flavours of South Carolina’, a fly and self-drive journey with comfortable daily mileages so you can savour the feel and the food of the Palmetto state.  You’ll stay in inns, b&bs and resort hotels along the way and there are three days to explore Charleston.