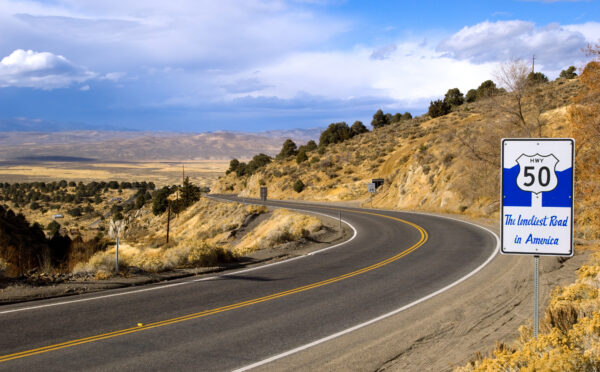 Bon Voyage credo number one: A perfectly crafted fly/drive holiday should be one of contrasts. Busy cities balanced with gorgeous scenery; days when you’re on the move and time to relax and contemplate; waterfront views and the open road.  You get the idea.

When Senior Travel Consultant, Lara Hearn, was offered this road trip of contrasts she couldn’t wait to head for Nevada.  Nevada is the driest state in the US, with some spots receiving just 4 inches of rain a year.  Essentially, we’re talking about a desert state but this one includes wet and wild Las Vegas and parts of Lake Tahoe, which at 200 square miles is quite the oasis!

Lara takes up the story:-

They say you have to see Las Vegas to believe it.  That you either love it or hate it.  My take is that everyone should go once and form their own opinion.  Many return again and again; they love the over-the-top, in-your-face on tap entertainment, the 24-hours a day, 365 days a year non-stop party-go-round; the all-star cast of world renowned artists, the biggest sports events, the highest stakes gambling; the drive through weddings; the high end resorts; the low life bars.  In short, the whole nine yards.  Others take one look and can’t wait to move on.  I love it and after the 20-minute transfer from the airport following the ten-hour flight from London and check-in to a fountain-view room at the Bellagio, was ready to hit the town.  I was pleased I’d had a nap on the flight because we were almost straight into the wonderful Cirque du Soleil, Beatles-inspired ‘Love’ show.  If the idea of beautifully choreographed movement and circus-based athleticism blended with the best of the fab four appeals then you will adore this production. It’s been running since 2006 and plays to packed audiences every show at a specially built theatre within the Mirage resort.

SpeedVegas boasts the longest and fastest race track around, gets you behind the wheel of an exotic super car including Ferrari’s, Porsche’s and Lamborghini’s and basically lets you have at it.  It’s quite the adrenaline-ride and it’s what we did on our second morning.  Speed junkies will love it and others could not think of anything worse.


Vegas can serve as your base to explore the wonders of Valley of Fire State Park with its areas of petrified wood and 3,000 years-old Indian petroglyphs.  Or you can make a helicopter day trip to the Grand Canyon which is a wonderful experience.  We managed both over the next day and a half and then finally headed out to Cathedral Gorge State Park where erosion has carved dramatic and unique patterns in the bentonite clay.  It’s a photographer’s and hikers dream but we were soon off to Ely and early dinner at the famous All Aboard Café.  It’s a popular spot with an all-American menu – great salads and the lobster roll was a treat.  It is really handy for the Nevada Northern Railway, the best-preserved example of a standard-gauge short-line left in North America and they were running a 90-minute Haunted Ghost Train on our evening in town. After an overnight in Ely we made an early start for Great Basin National Park and an hour-long tour of Lehman Caves.  Slowly sculpted over the ages by water, the caves can be traced back 600 million years when Nevada and Western Utah were covered by a warm, shallow inland sea.

Finally, at 10.30am we’re ready to hit Highway 50.  There’s a lot more to Highway 50 than Nevada.  In fact, it runs from Ocean City, Maryland on the east coast to Sacramento, California.  But the desert stretches are renowned for their solitude particularly as the interstate system long since became the fastest way to drive coast to coast.

Apart from the hum of the engine the silence is deafening.  Not only isn’t there another vehicle in sight, we haven’t seen one for half an hour.  Out here we see Nevada mustangs, indigenous wild horses, roaming free.  We make what our American friends call comfort stops in Eureka and Austin and apart from that it’s just us and the highway.  Finally, at 7pm we arrive at the Hyatt Regency Lake Tahoe and dinner at Cutthroats Saloon with hearty portions and beers served in mason jars which are like jam jars from days of yore.  After the solitude of Highway 50 it’s quite a contrast (that word again) to find our resort is complete with seven bars and restaurants, a casino, 24-hour gym, hot tub, spa – you name it.  There’s also a beach and with the lake being so vast you are to all intents and purposes at the seaside.

Just as Vegas can be your base for some of the attractions of southern Nevada so Lake Tahoe can serve the same purpose for the west of the state.  The lake straddles Nevada and California with the border point at the aptly named Stateline.

The lake is big and beautiful and we took a wonderful sunset dinner cruise which was actually, for me, one of the highlights of the whole trip.  You board a paddle-wheel steamer at nearby Zephyr Cove and there is a great atmosphere with live music playing and champagne flowing.  There is a full three course dinner with table service but the real magic comes from the pinks and purples of the sky as the sun goes down over the lake.

There was time on our last morning for a trip out to Virginia City, a faithfully preserved Western town of the gold rush years of the mid-19th century.  A narrated walking tour leads you along the streets that were once literally paved with silver ore.  You can visit the abandoned mines and even the school that was built to accommodate the influx of speculators and their families.

Then it was on the 20-odd miles up to Reno for the short flight back to Las Vegas for the onward Virgin Atlantic service to London.  It’s a great fly/drive holiday and much of it has been adapted into our ‘Nevada and the Loneliest Road’ itinerary which you can find on the website at
www.bon-voyage.co.uk/nevada.