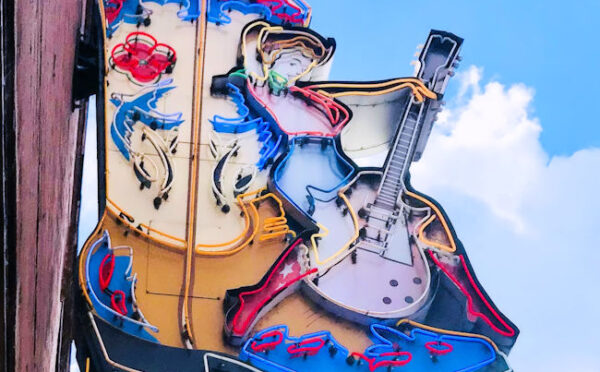 Led by our resident American, Theresa Wilson and Sales Manager, Joanna Still, the Bon Voyage Six set off on a 1,000-mile familiarisation trip.

Individual members of the Bon Voyage sales team travel throughout the year to the US and Canada on visits organised by state and province tourist offices.  But the ‘Big Daddy’ is our own annual blitz to take in as much territory as we can usefully cover.  We flew from London Heathrow to Nashville on the new British Airways non-stop service and were lucky enough to sample the delights of Club Class. This is THE way to start and/or finish a Transatlantic holiday and if you pick the right time to book (we’ll guide you on this) it doesn’t have to break the bank.  We needed a little flat-bed comfort because this was going to be anything but a holiday. Our aims? To site-inspect 29 hotels, check out new attractions, understand local geography and transportation and of course sample the food and entertainment!  (We have a policy that we never recommend a customer to a hotel we wouldn’t stay at ourselves, and to say we have become picky over the years would be an understatement.)

Nashville on a balmy Saturday evening was buzzing.  The senses are assaulted by the neon signs, honky-tonk bars and music clubs of Broadway, the heart and soul of the action between First and Fifth Avenues.  One innovation we saw is the pedal bar which is a moving pub crawl with about a dozen riders enjoying a boozy tour of the neighbourhood.  We took in Tootsie’s Orchid Lounge, a Nashville legend for over 50 years and where Willie Nelson, Patsy Cline and a host of others made their names.  By that time our beds were calling us.

Nashville is known as Music City and really does have a country music style for everyone. Sunday highlights were Studio B, (who can resist sitting at the same piano Elvis once sang at), The Country Music Hall of Fame and of course the world-renowned Grand Ole Opry.  We ate at the legendary Sun Diner, where the walls are lined with photos of stars who went there after a night of recording. We scoffed our ‘Jonny B Good’ egg flatbreads and ‘Love me’ Tenders while wallowing in the nostalgia of a bygone era.

Then we hit the road to visit nearby Franklin.  This cutesy town is lined with one-of-a-kind boutiques and now has quite the reputation for an ‘Off Nashville’ music scene. Just to challenge ourselves some more on the mileage front we drove part of the Scenic Natchez Byway and were treated to lovely countryside views.  We were too early for the Fall colours but it is a spectacular show once an Autumn frost descends upon the route. Then it was on to Tupelo and a visit to Elvis Presley’s birthplace. A very modest two room building, housing some original items, most notably a picture of Elvis and his parents hanging over the fireplace. The birthplace and interpretive centre are definitely worth the stop for any Elvis fan; a true ‘hair on the back of the neck’ experience for some of us.

Day 3 saw an early start to Memphis and check-in at the majestic Peabody Hotel where yes, there really are ducks in the lobby. Whether its music or history that draws you to this city it doesn’t disappoint.   We couldn’t visit Memphis without another ‘Elvis Event’, a tour of his Graceland home. This was my second visit to the mansion, but I was just as teary-eyed this time as last. We were extremely impressed with the new entertainment and exhibition complex opened in 2018 by Priscilla Presley. The mammoth new ‘Elvis Presley’s Memphis’ houses a showcase of cars he owned and used, a soundstage, two restaurants and retail stores, artefacts from Lisa Marie’s childhood and of course those dazzling suits.

A new experience for me was the Arcade restaurant, one of Elvis’s favourite diners. Get there when it opens at 7am and you can sit in Elvis’s booth. The restaurant is just a short walk from the Civil Rights Museum where the Loraine Motel stands. We walked around the site prior to breakfast; the sun was rising as we reflected on the events of 4th April 1968 when Martin Luther King was assassinated at this very spot.

‘The Six’ all agreed that our favourite activity in Memphis was the Rockabilly Rides tour. Founded by two Beale Street entertainers who really know their Memphis music history, we were taken on a journey into Rock ‘n’ Roll history while exploring the city streets in style.  Our ride was a 1955 Chevy Bel Air while other options include a 1959 Ford Skyliner and a 1956 Chrysler Imperial.  We never felt cooler!

​By day four we were on to our 5th state of the visit.  There was Tennessee, of course and Mississippi with Alabama clipped along the way, then the tip of Arkansas before we settled into our journey north and into Missouri on Interstate 55.  St Louis was our destination and as we drove towards the city there was a collective gasp at the first sighting of the Gateway Arch. Opened in 1967 as a monument to the westward expansion of the United States, at 630 feet it’s the tallest man-made monument in the western hemisphere.  You travel by a tram within the arch and if you’re not impressed by this engineering and architectural wonder you will be by the views from the observation platform as you gaze 30-miles across the Mississippi River to the East and the heart of St Louis to the West.

St Louis is also home to Forest Park, with its 1,400 acres of walking, running and cycling trails.  Steeped in history the beautiful park was opened in 1876 and hosted the Olympic Games of 1904.  As a footnote at those Games 651 athletes competed; 645 men and 6 women.  Six women!  It had to be a sign – a sign that we needed a cocktail at the end of another busy day.

So many of our clients want to experience the kicks and kitsch of Route 66 that it was essential to take in just a part of the Mother Road before our final city stay, Chicago.  On the morning of day 6 we took in Springfield and Pontiac. Pontiac is captivating with vibrant murals and reminders of Route 66 of old, whilst Springfield is a history buffs delight, home to an authentic collection of Abraham Lincoln sites that let you ‘step back in time to walk in the legendary president’s footsteps.’

Chicago is a favourite in the BV office, and a city that you can visit time and time again. Famed for lakes, beaches, culinary delights and theatre shows to rival those of Broadway, Chicago has been voted Americans favourite vacation city.  The upsurge in interest in Route 66 has enabled us to showcase Chicago as the great visitor experience it truly is.

Whilst in Chicago we were spoilt with a stay at the swanky Viceroy Chicago Hotel in the ritzy Gold Coast neighbourhood. Voted #1 hotel in Chicago by Conde Nast readers in 2018, it is an elegant mix of vintage and contemporary, and the panoramic lake and skyscraper views from the rooftop pool added a touch of magic to our stay.

Talking of city skylines, Chicago is an architectural mecca and home to iconic buildings such as the John Hancock Centre, Willis Tower and Tribune Tower. We were brave enough to take the ‘tilt challenge’ at the 360 John Hancock, suspended on a glass platform over 1,000 feet above the Magnificent Mile.  It is certainly a novel way to see Chicago and received the thumbs up from us all once we’d done it!

After all that sightseeing Navy Pier, 50-acres of parks, gardens, shops, restaurants and family attractions, beckoned us for a last Margherita and deep-dish pizza.  Chicago and its residents ooze a self-assured confidence and you don’t need to be in this city for long to understand why its residents are so proud of where they live.

So, there you have it, our BV road trip in a nutshell. Quite frankly the highlights are too many to mention and we loved every second of our adventure.