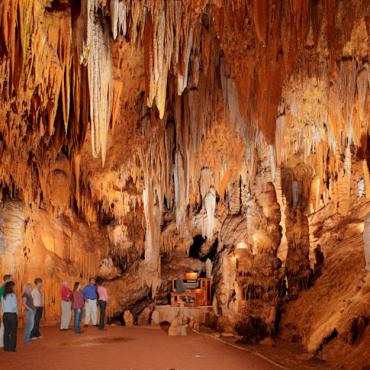 Discovered in 1878 and more than 4,000,000 centuries old, nearly 500,000 people annually visit Luray Caverns, eastern America's largest and most popular caverns system. This U.S. Natural Landmark, noted for variety of formations and unsurpassed natural colour, has hosted visitors from all 50 U.S. states and 52 foreign countries. From well-lighted, paved walkways travellers explore cathedral-sized rooms with ceilings 10 stories high and pass through huge chambers filled with towering stone columns, shimmering draperies and crystal-clear pools. The Smithsonian Institution report of July 13 and 14, 1880 comments "....it is safe to say that there is probably no other cave in the world more completely and profusely decorated with stalactite and stalagmite ornamentation than that of Luray."

A feature on the one-hour tours is the haunting sounds of the Great Stalacpipe Organ, the world's largest musical instrument. This most unique one-of-a-kind instrument uses stalactites covering 3 1/2 acres of the surrounding caverns to produce tones of symphonic quality when electronically tapped by rubber-tipped mallets.

In addition, at Luray Caverns experience the history of America in our Car & Carriage Caravan exhibit featuring over 140 items relating to transportation including cars, carriages, coaches and costumes dating from 1725, along with the new Luray Valley Museum - a collection of local, restored historic buildings creating a small 19th century farming community including a museum of Shenandoah Valley, The Stonyman, showcasing artifacts from the 1750's to the 1920's.

The attraction complex also includes as a separate fee attraction,  a one acre ornamental garden -The Garden Maze- creating one of the largest hedge mazes in the Mid-Atlantic states.