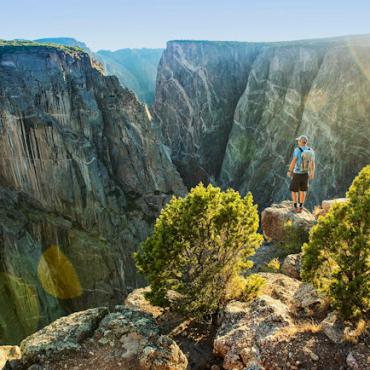 Most rivers of the Southwest cut through relatively soft sedimentary rock, forming canyons that tend to be quite wide, colourful and stepped - descending in a series of cliffs and ledges through layers of differing hardness.

One of the steepest, darkest and most rugged of such canyons is formed by the Gunnison River as it flows through hard ancient rocks at the western edge of the Rocky Mountains, on its way to joining the Colorado river at Grand Junction. The canyon walls are composed of volcanic schist, predominantly black in colour, and as the gorge reaches depths of over 2,000 feet while often being only 1,500 feet across, sunlight illuminates the walls only briefly, hence the name 'Black Canyon'.

Deep enough to fit Empire State Building, it is unsettling, almost frightening to stand at the very edge of one of the canyon overlooks. Situated just east of Montrose, be sure visit this eerie wonder!