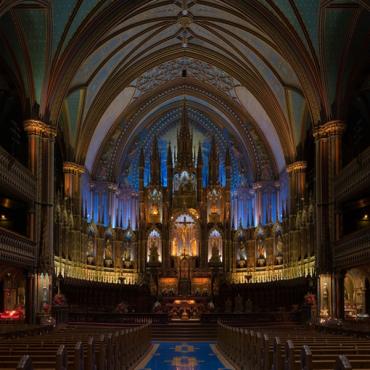 Montreal's Notre-Dame Basilica has nothing in common with Paris's except the name. The neogothic building dates from 1829 and is constructed on the site of a much older and smaller church which had been outgrown by its parishioners.

Notre Dame is noted for its lavish and beautiful interior – stained glass windows, paintings, statues, gold-tipped polychrome carvings and rich altarpiece. It also has a notable Casavant organ and its largest bell, le Gros Bourdon, is the biggest on the continent.