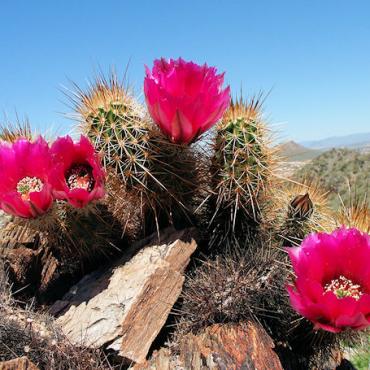 The Valley of the Sun or Phoenix metropolitan area also includes the cities of Scottsdale, Glendale, Chandler, Tempe and Mesa. Distances aren't great, so you can easily base yourself in one place and explore. Mountains, history, golf, amazing food and architecture as only the southwest does it.
There's an affinity many feel with the desert including renowned architect Frank Lloyd Wright. His desert masterpiece, Taliesin West, is nestled in the Scottsdale foothills of the McDowell Mountains. Construction began in 1937 and the winter home was crafted by hand over several years. With deep connections to the desert, Taliesin West was a true labour of love built entirely by Wright and his apprentices. Be sure to take the guided tour of the home which is also the location for the Frank Lloyd Wright School of Architecture.
Continue the theme and visit Gammage Auditorium, in Tempe. This structure, built by Wright, resembles a tiered birthday cake and was originally intended to be the royal opera house in a city further north. Arizona State University is the proud home of this striking venue and routinely hosts concerts and Broadway musicals.

Looking for a bit of wow topped with more wow?  This is the one!  Arizona may just be one of America's best kept secrets - find out for yourself.......

Discover three of America's best national parks and visit Bryce Canyon, Zion and the Grand Canyon on this escorted tour of the Canyonlands.

Two hours north of Phoenix/Scottsdale, this is a great stop on they way to Sedona, Flagstaff or the Grand Canyon. Downtown Prescott is an idyllic hamlet nestled comfortably within a verdant national forest with plenty of wild west and gold rush...

A wealth of activities and experiences await you in Arizona's White Mountains. Venture here to enjoy the quiet beauty of this region and the cool, crisp mountain air.

Explore the Heard Museum’s rich history as one of the Phoenix area’s first cultural attractions, and see how the museum has grown to be one of the world’s finest destinations for learning about American Indian arts and cultures.

A drive on the Apache Trail is one of the most scenic drives near the Phoenix area. This well travelled road affords you an incredible view of canyons, geologic formations, desert plants and trees, desert and lake views, and wildflowers in...

The caverns were apparently unknown to man until 1974, when two amateur cavers found a narrow crack in the bottom of a sinkhole, and followed the source of warm, moist air toward what ended up being more than 2½ miles of pristine cave...

A former mining town, that became a boom town and then went bust - America's largest ghost town is definitely worth a visit.  Just two hours from Scottsdale, it's a perfect stop if headed for Sedona, Flagstaff, the Grand Canyon or...

When you think of Arizona normally the statuesque Saguaro Cactus usually comes to mind. It stands tall as an iconic symbol of Arizona. In their masses, they typically form the backdrop for those good old cowboy films.

Fascinating Meteor Crater is located only 35 miles east of Flagstaff and 20 miles west of Winslow, Arizona.

To be true to the area's rich history, the Sedona single day tour gives you a chance to explore ancient Native American civilizations. The tour features one of two Sinaguan Indian ruins that existed along a busy trade route over a 1000 ...

No trip to Arizona is complete without a visit to the Grand Canyon.  Let someone else do the driving so you can enjoy the mega scenery.

Experience the sunrise and sunset at the Grand Canyon while touring Arizona's must-see destinations. Start your tour with a scenic drive and photo opportunity in Sedona, followed by an overnight stay at your choice of Grand Canyon ...

The great chasm that is The Grand Canyon was carved over millions of years by the rushing Colorado River.

Charming and historic, the town of Bisbee is only 82 miles southeast of Tucson and worth a day trip or overnight.

Scottsdale is all about the out of doors!  Have a little look......

The stunning Arizona Biltmore showcases elegant design that compliments incredible amenities. This popular destination holds its value to U.S. presidents and legendary film stars which have vacationed here since the hotel's opening in 1929.