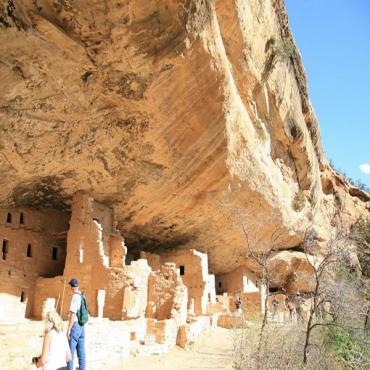 West of Durango is Mesa Verde National Park, a World Heritage Site, this is the world’s only man-made national park and the only national park in the US exclusively devoted to archaeological remains..

It’s an incredible place and was so far off the beaten path that its extensive Anasazi ruins were not fully discovered until 1888.  Between the time of Christ and 1300 AD, Anasazi civilisation expanded to cover much of this region known as the Four Corners.  Their earliest dwellings were simple pits in the ground, but before they vanished from history they had developed the architectural sophistication needed to build the extraordinary complexes of Mesa Verde.

The most famous dwelling is Cliff Place with over 200 rooms, some of which can be reached by tall ladders, other by shady walks through golden canyons.

Call Bon Voyage for places to stay in and around Mesa Verde, note that park accommodation does book out early and you’ll have to be up early to obtain your ticket to enter the dwellings.

This is a contrasting journey of discovery from the mighty, majestic mountains of lush Colorado to the red sandstone canyons and incredible National Parks of stunning Utah.

An incredible journey that showcases the wonders - both natural and man-made - of this wonderful area of the Western United States.

The historic Durango to Silverton Narrow Gauge Railroad is simply a must-do on any visit to Colorado. The line was constructed to haul silver and gold between the two towns in the 1880’s, but the passengers soon realised it was the view that...