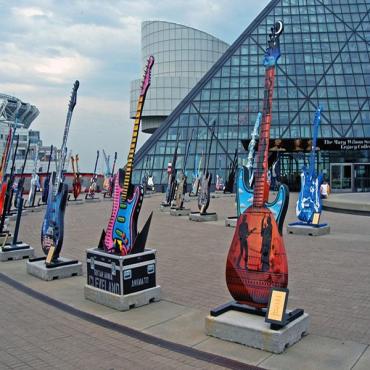 The Rock and Roll Hall of Fame located in downtown Cleveland is dedicated to recording the history of some of the best-known and most influential artists, producers and others who have, in some major way, influenced the music industry - particularly rock and roll.

With a permanent collection drawing from the most impressive and iconic rock and roll artefacts and a wide-ranging roster of on-going and temporary exhibits, the Rock and Roll Hall of Fame and Museum is dedicated to exploring the past, present and future of the music and the cultural context from which it emerges. The Museum continually augments its own collection of thousands of artefacts with items on loan from artists and collectors from around the world. Currently, groups or individuals are qualified for induction 25 years after the release of their first record. Nominees should have demonstrable influence and significance within the history of rock and roll.  Fans have no input concerning who is nominated or elected to the hall.

Beginning in 2009, the annual induction ceremony will move to Cleveland on a rotating basis, perhaps as often as every three years.