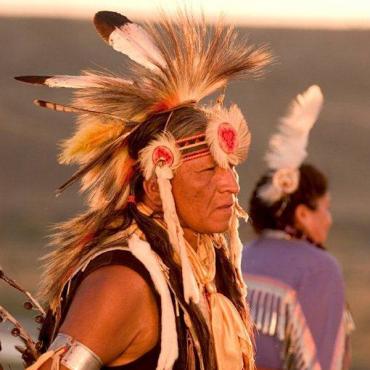 South Dakota was named after the Native American Sioux tribes - the Lakota, Dakota and Nakota who historically dominated the territory.  The discovery of gold in the Black Hills brought prosperity to the region, but also land disputes and war between new settlers and the Sioux. The history of the area and Native American heritage is as evident today as it was then.  If you are lucky enough to experience a powwow - a Native American celebration and social event, you'll never forget it.  The drums, dances and elaborate feather and beadwork are a privilege to witness.

South Dakota is called the land of infinite variety.  And with good reason! Variety is everywhere from the diverse geography to the rich history and famous inhabitants.  Speaking of inhabitants, South Dakota covers an area over 77,000 square miles, but averages just 10 people per square mile.  That means plenty of wide open space to explore....the prairies, Badlands and Black Hills.  Oh, and South Dakota has more shoreline than the state of Florida, so make sure you bring your swimming costume.  And your cowboy hat, Rodeo is the state sport!

And, we haven't even started talking about the famous monuments, National Parks and wildlife.  We best get you on your way! 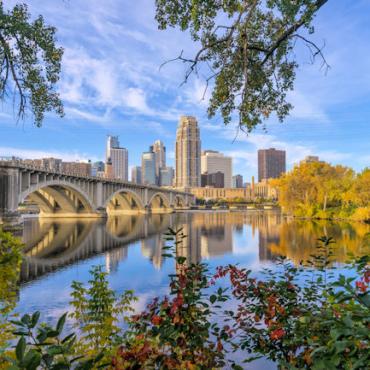 The biggest and artsiest town on the prairie, Minneapolis is awash with trendy art museums, eclectic eateries and cutting-edge theatres.  The city is bisected by the Mississippi River and lies on both banks. With thirteen lakes, wetlands, rivers and waterfalls, not only is Minneapolis rich in the arts, but in outdoor water pursuits. It also has one of the USA's best park systems.

Spend your night enjoying a lovely stroll and some live music before hitting the road to discover the Great Plains of America! 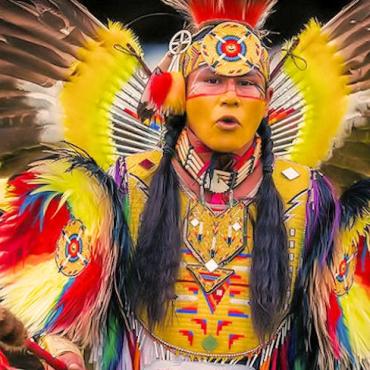 Rise early and enjoy a hearty breakfast before starting your road trip through the 'Land of 10,000 Lakes', Minnesota. We suggest you break your journey in the heart of the lake district in Alexandria. Enjoy the great outdoors surrounded by over 200 pristine lakes. Stroll through Alexandra's historic  downtown area, or take a jaunt on part of the Glacier Ridge Scenic Byway.

History buff? Take a slight detour and explore Little Falls, the boyhood home of Charles Lindbergh. Or discover the source of the Mississippi River at Itasca State Park.

Rodeos and powwows are important parts of North Dakota culture and take place regularly between May - September. Ask your Bon Voyage consultant to look for your particular travel dates. 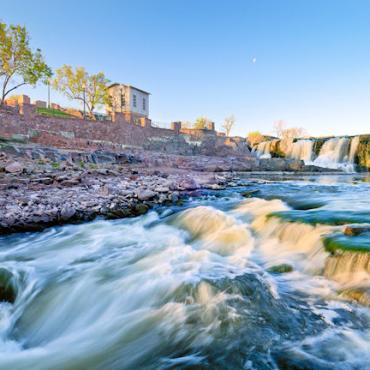 The north east corner of South Dakota is steeped in history and heritage. Learn about the area’s past as you stroll around the grounds of Fort Sisseton Historic State Park and take a look inside barracks and other buildings once used by officers and guards of the U.S. Army. Visit in early June for the Fort Sisseton Historical Festival and Rendezvous when Cavalry troops and infantry units come together to form a military encampment with tents, horses and memorabilia. The military is joined by fur traders to celebrate frontier life with fiddle music, arts and crafts, hoop dancing and songs and music from the civil war era.

The Sisseton Wahpeton Oyate Reservation is one of three open reservations in South Dakota. During the Fourth of July weekend their annual Wacipi (Powwow) is one of the USA’s longest running powwows featuring three days of dancing, drumming, food and craft stalls, rodeo and a softball tournament.

For far reaching views across South Dakota as well as neighbouring North Dakota and Minnesota climb the 75-foot Nicollet Tower which was built in honour of Joseph N. Nicollet, a French mapmaker who explored the area in the 1830s.

Sioux Falls, the urban centre of South Dakota, is rooted in Native American Lakota Sioux history. One of the highlights is Falls Park, with a beautiful triple waterfall. The craft brewery scene has exploded here, as has the dining scene with many world champion chefs in town.

With multiple museums you will be spoilt for choice on art, history and culture.  Follow the SculptureWalk through downtown; every year over fifty new sculptures are displayed throughout the city so you will never see the same one twice! 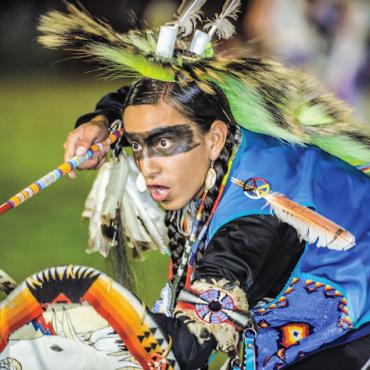 Head west into the heart of South Dakota to its state capital, Pierre. Along the way, stop at two of the state's most iconic roadside attractions.....

In Mitchell you'll find the world’s only Corn Palace with uniquely designed murals, all made from naturally coloured corn, grains and native grasses. The Dignity of Earth and Sky sculpture casts a peaceful gaze across the waters of the Missouri River near Chamberlain. Standing fifty feet tall, the statue honours the cultures of the Lakota and Dakota people.

Be sure to stop also at De Smet, childhood home of Laura Ingalls Wilder author of ‘Little House on the Prairie’. Laura’s books captured the founding of De Smet, in fact her family were the first residents and she carried the memories of this special place throughout her life. At the Ingalls Homestead, take a journey back to1862 with a trip on a covered wagon and a stroll around the period buildings.

In Chamberlain, visit the Lewis & Clark Welcome Center which commemorates the life of the pioneers on their 1803-1806 expedition through South Dakota. At the Aka Lakota Museum you'll find incredible displays focusing on the lives of Northern Plains Indian tribes. 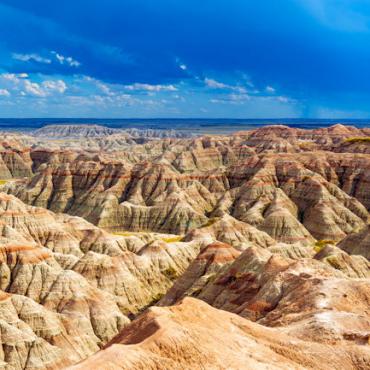 Be prepared to be amazed today as you reach Badlands National Park via the Buffalo Gap National Grasslands. Be on the lookout for bison, prairie dogs, longhorn cattle, coyotes and pronghorn.

Badlands National Park known as 'The Land of Stone and Light'  is a maze of buttes, canyons and gullies formed by millions of years of erosion. In fact, the striking geologic deposits contain one of the world’s richest fossil beds. We promise, you'll never see anything like it!

On the Badlands Loop Drive (Highway 240) discover the sights of the park, gaze over beautiful landscapes, visit informational exhibits and enjoy glimpses of local wildlife. Witness the layers of coloured rock change in the warmth of the sunlight throughout the day and at night experience star gazing in some of the darkest skies in the USA.

Millions of years ago, the Black Hills, Badlands and western prairie was home to countless species of dinosaurs and other prehistoric animals, so it's no wonder that this area is a hot-spot for fossil discoveries. Hike the Fossil Exhibit Trail, which features replicas of fossils and extinct creatures that once roamed the area, then check out fossil specimens at the Ben Reifel Visitor Center.

A new attraction in the Badlands is the Oglala Lakota Living History Village. Hear the Lakota stories, told by Lakota people through expressive song and dance, as well as exhibits.

South of Badlands, visit Wounded Knee, where on December 29, 1890, sadly the massacre of 150 Lakota Indians was the climax of the U.S. Army’s late 19th-century efforts to repress the Plains Indians.
In nearby Pine Ridge the annual Oglala Nation Powwow & Rodeo takes places the beginning of August, where beating drums, powerful dances and soulful singing are guaranteed to mesmerise you!

Did you know.....in the Cheyenne River Indian Reservation in 1990 the largest and most complete Tyrannosaurus Rex fossil – at the time – was found in the Black Hills of South Dakota by Sue Hendrickson. The fossil was 42 feet long and later sold to the Field Museum for a staggering $31 million!  Nicknamed 'Sue', Dinosaur 13, is the fascinating documentary of its discovery.

If you're lucky enough to be in the park in September, you'll want to experience the Custer State Park Buffalo Roundup.  Watch cowboys and cowgirls roundup and drive the enormous herd of stampeding buffalo!
Head south of the park to explore Wind Cave National Monument where you can walk in of the longest caves in the world and discover rare calcite formations knows as boxwork along with cave popcorn, honeycomb and frostwork features.

Further south in Hot Springs, visit the Mammoth Site to experience an active paleontological excavation of Ice Age Animals, or take a relaxing dip in the naturally heated mineral water in the town. 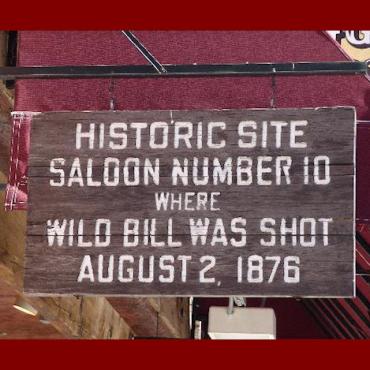 Start your day with a visit to Crazy Horse Memorial. In 1948, work began on this sculpture to honour Native American warrior Crazy Horse – when completed the sculpture will stand 641 feet long and 563 feet tall making it the world's largest sculpture. At certain times of the year tours are available up to the head of the carving, please check with your Bon Voyage consultant if this coincides with your visit.

Meander along the scenic Needles Highway and Iron Mountain Road before the pièce de résistance to your trip and one of the most universally known attractions of South Dakota – Mount Rushmore National Memorial.  The 60 foot high sculpture, carved into Mount Rushmore, depicts the faces of U.S. Presidents George Washington, Thomas Jefferson, Theodore Roosevelt and Abraham Lincoln.  The idea of creating a sculpture in the Black Hills was dreamed up in 1923 by South Dakota historian Doane Robinson. He wanted to find a way to attract tourists to the state. It certainly worked!

As you approach Deadwood there is an attraction that pays tribute to the 60 million beasts that once wandered the great plains of North America. Tatanka: Story of the Bison.

The Old West town of Deadwood is where the legends of Wild Bill Hickock and Calamity Jane live on. Visit the Days of 76 Museum or try your luck at one of the town’s numerous gaming parlours. Stroll along the historic Main Street and see where the legendary folk hero was laid to rest! The city retains much of its Old West charm, including historic storefronts and rustic streets. The live reenactments on Historic Main Street during the summer add to the Wild West theme.

Operating as an authentic gold mine from 1876 to 1904, and providing a fun tourist experience for the last 70 years, the Broken Boot Gold Mine takes you underground to explore Deadwood's historic gold rush past - tours are available every 30 minutes.

Sitting high above the city and nestled deep into the Black Hills, Mount Moriah Cemetery is the final resting place for some of Deadwood's most notable characters. Not only can you find the gravesites of people like "Wild Bill" Hickock, Calamity Jane, Preacher Smith, and Potato Creek Johnny.

Take a trip out the city along US Highway 14A and discover the windy roads and towering limestone cliffs of Spearfish Canyon. Just across the border in Wyoming, you'll also come across the tiny town of Sundance, where the legendary Sundance Kid got his name after spending time in prison here. 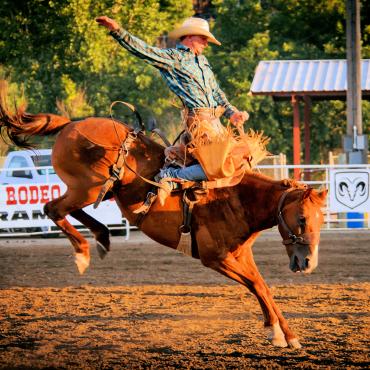 Rapid City was founded in 1876 by a group of disheartened prospectors that had come to the Black Hills in search of gold. They laid out a one-square-mile business district and named their settlement Hay Camp, eventually renaming it Rapid City after the creek running through it. After six months, Rapid City’s population numbered a little over 100.
Today it's a thriving western city with live music on 7th Street every Thursday night in the summer, a colourful Back Hills Powwow every October and rodeos scattered throughout the year.

The powerful Journey Museum is a must- do whilst in the city. Five major prehistoric and historic collections tell the complete story of the Western Great Plains - from the perspective of the Lakota people and their unique Native American history to the pioneers who shaped its past and the scientists who now study it.

Stretching over half a block and covering two floors, the Prairies Edge Native American Store in downtown is the perfect place to stock up on last minute western souvenirs. From western apparel to Native American crafts the choice is endless.  Grab yourself a pair of cowboy boots to take home to remind you of your visit to South Dakota! 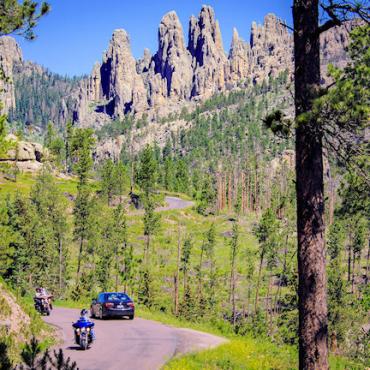 Your flight departs mid-morning back to the UK.

Want to extend your time in South Dakota? Maybe visit neighbouring Wyoming and Yellowstone national Park?
All Bon Voyage holidays are tailor-made to your exact requirements, please contact us for further details.