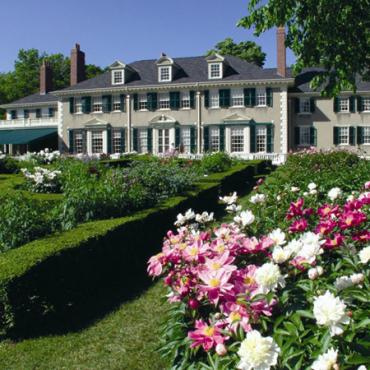 His father was born in a log cabin and called from the humblest rank in life to preside over America during the most momentous period of its history. One generation later, Robert Todd Lincoln, the only child of Abraham and Mary Todd Lincoln to survive to adulthood, became Chairman of the Pullman Company, the largest manufacturing corporation at the turn of the 20th century.

He built his Georgian Revival mansion in 1905 in the scenic village of Manchester,Vermont. It became home to only Lincoln descendants until 1975, longer than any other Lincoln residence. It is the Great American Story.

Your visit to Hildene will include a brief video in the Welcome Centre, a self-guided tour of the Lincoln home, listening to the 1,000-pipe Aeolian organ and access to the Hoyt Formal Garden. You'll also want to visit the Cutting and Kitchen Gardens, the observatory, Hildene Farm, and the exhibits. Guided Tours are offered at noon each summer day,