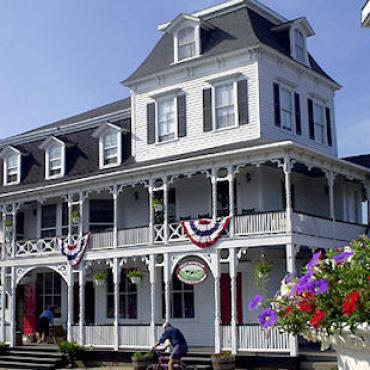 Block Island, an 11-square-mile seaside resort located 12 miles off the Rhode Island coast, has been heralded as "One of the Last Twelve Great Places in the Western Hemisphere."

Its rolling green hills and dramatic bluffs are reminiscent of Ireland, while its beautifully restored Victorian hotels and inns preserve the elegance of a bygone era.

Long public beaches and 365 freshwater ponds are the main attractions of this tiny island, whose people are strongly devoted to preserving the ecology. The Block Island Nature Conservancy operates a large trail system on the island, offering walking and hiking paths through grassy meadows, quiet woods and along the sandy shore.

Shops and restaurants are abundant in bustling Old Harbor, which is served by frequent ferry boats from Point Judith, Rhode Island. An hour long ferry ride is the most popular method of traveling to the island, although some prefer to take the easy 20 minute flight from the state airport at Westerly, Rhode Island.

It's a delightful place to hire a bike and explore the island for the day!