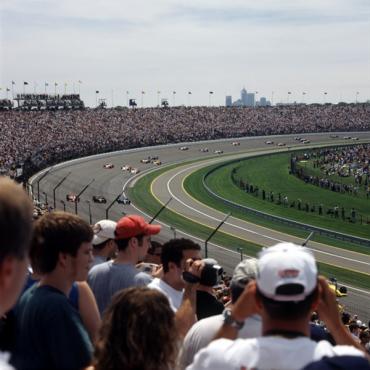 It has existed since 1909, and is the original "Speedway," the first racing facility historically to incorporate the word. With a permanent seating capacity for more than 257,000 people and infield seating that raises capacity to an approximate 400,000, it is the largest and highest-capacity sporting facility in history.

Considered relatively flat by American standards, but high-banked by Europeans, the Motor Speedway is a two and a half mile, nearly rectangular oval with dimensions that have remained essentially unchanged since its inception.

The big race itself, often shortened to Indianapolis 500, Indy 500 or simply as The 500, is held annually over Memorial Day weekend in May.

The event, billed as "The Greatest Spectacle in Racing", is one of the oldest motorsport events, and is considered one of the three most significant motor racing events in the world.

Other racing events are held at the Speedway through out the year and visitors can enjoy the Hall of Fame Museum right on the grounds.