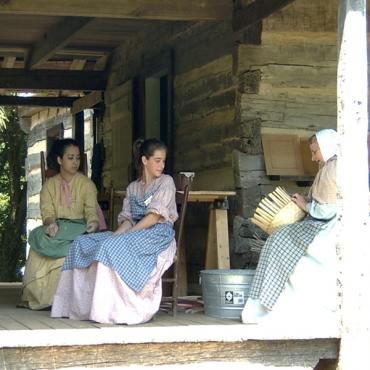 Situated on 167 acres of some of the most scenic land in North Alabama, Burritt on the Mountain is a a Living Museum that has been referred to as a "Jewel on the Mountain." Start with Dr. William Henry Burritt's eclectic mansion (built in the shape of an X and insulated with 2,200 bales of hay!), add an historic park with restored 19th century houses including barn yard and animals, and finally throw in the artistic side with concerts, plays and exhibits, and you have a delightful mixture of old and new for young and old!

In 1955, Dr. Burritt willed his grandoise mansion and surrounding acres of Round-Top Mountain to the city of Huntsville, making it Huntsville's first museum. Since that time, volunteers have brought original homes from the area to Burritt to be restored and utilized as an educational facility. The interpreters are always busy demonstrating activities as one would see on a 19th century farm. Blacksmithing, spinning, and cooking over an open hearth are just some of the skills employed in the historic park. In the summer it’s a great place to picnic under the shady trees and enjoy one of the concerts..