The 7 day adventure Un-Cruise was top class! The small group (circa 35 passengers and 15 crew) gelled. Great food and drinks! The knowledge, friendliness of the crew and their encouragement to those nervous when undertaking water-based sports was outstanding. 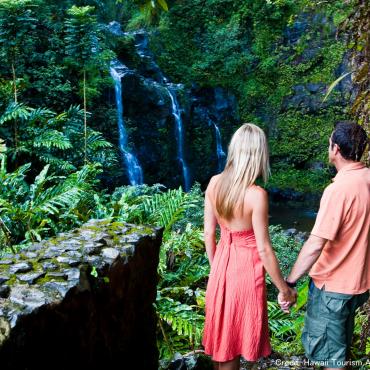 To avoid confusion between this island and the state of Hawaii (the entire group of islands), Hawaii Island which is twice as large as all the other islands combined, was nicknamed Big Island.  Most of the native Hawaiians still call it by it's traditional name, but both are acceptable.  Covering 4,000 sq miles, it is roughly half the size of Wales and is the most geographically diverse, with eleven of the earth's thirteen different climates. You'll be in awe of the pre-historic black lava desert plains, waterfalls, rainforest, the world's most active volcano and, believe it or not, snow-capped mountains.

The western side of the island is the driest in the region whilst the east coast is rugged, the seas are rougher and tropical rainforest, ravines and waterfalls dot the landscape.

Volcanoes National Park, located 30 miles southwest of Hilo is simply a holiday must. Kilauea, officially the world’s most active volcano, produces enough lava to resurface a twenty mile, two-lane road daily.  Pele the Fire Goddess is one of the most revered in Hawaiian mythology and is said to reside here.  She is a goddess of fire, lightning, dance, wind, volcanoes and violence and the creator of the Hawaiian Islands.  As you can imagine, this area is considered a sacred place for Native Hawaiians and visitors can witness something extraordinary.

Secluded tropical beaches fringed with swaying palms trees like you've never experienced before.  This group of Polynesian islands, set in the South Pacific, IS a tropical treat you'll never forget.

On this heavenly Hawaiian Island Hopping holiday you'll stay in handpicked, quaint small inns and hotels on each of the Islands of Oahu, Maui, Kauai and The Big Island.

The perfect combination - enjoy the neon lights of Vegas before exploring Hawaii's dreamy islands on board Norwegian Cruise Line's Pride of America then finish with two nights along one of California's best beach resorts - Santa...

History, culture and incredible natural beauty. Discover four of Hawaii's most dazzling islands in an adventure that ranges from iconic Honolulu to the natural wonders of Kauai.

Awe-inspiring volcanoes, royal beaches and the Sleeping Giant mountain ridge mark your progress, on this laid-back journey of discovery of Oahu, Hawaii, Maui and Kauai.

Dramatic scenery is just one of the highlights on this Hawaiian trip, that takes in the best of vibrant Waikiki, exotic Kailua-Kona and the stunning Kaanapali Beach.

Not really a traditional cruiser?  Than this holiday is for you. Uncruise focuses on native traditions, exploring and adventure, but in a warm and casual setting with you at the forefront.

Hawaii is a destination really geared towards stargazing; boasting 90% clear nights and a total of 13 large telescopes on the summit of Mauna Kea alone. The surrounding ocean cuts down on artificial light pollution and leads to better, more...

Hula was born on Hawaii and the biggest festival takes place each spring on the Big Island.

It’s hardly surprising why directors chose Hawaii as the setting to their screenplays – Hawaii is a picture paradise, where sheer cliffs, lush greenery, and clear waters offer the ultimate backdrop.

This tour will bring the wonders and excitement of the Hawaii's Big Island to life. You will enjoy a fully narrated 260...

Mark Twain called it, "a scene of wild beauty". Just as it was for Twain over a century ago, this is truly the experience...

This incredible 62-acre resort is like no other on The Big Island, it’s a destination in its own right.  And, a lovely spot for whale watching in season.

Luxurious, tranquil accommodation on the Kohala Coast.  This quieter area is ideal for those who truly want an escape.

Wake up on the rim of Kilauea, one of the world's most active volcanoes.  This is one of those places where it isn't about the room - not even a little!

Private oceanfront luxury 8 room bed & breakfast. If you want a unique experience, this is the place for you!

Overlook beautiful Anaeho'omalu Bay and step outside to pristine white sandy beaches where recreations on the Kohala Coast are endless.

Swim in the turquoise waters surrounded by a lava rock landscape and indulge every moment at this 5 star hotel & resort.

Located on the slopes of Mount Hualalai this bed and breakfast is not just an “accommodation,” it is an extraordinary Hawaiian experience which oozes the spirit of Aloha!

This showstopper oceanfront luxury resort definitely delivers the wow factor and perfectly situated for all kinds of island adventures.

Boasting an oceanside location with magnificent views of Hilo Bay this friendly hotel is close to many local attractions.