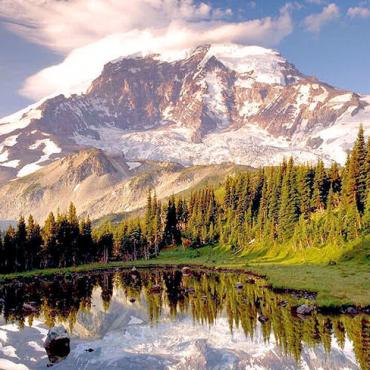 Welcome to the Great Pacific Northwest, an area of the USA where the geography and landscapes are unique from anywhere else in America and actually vary dramatically within.

The region is bounded by the coastal waters of the Pacific Ocean to the west and, loosely, by the Rocky Mountains to the east. No official boundary exists, but the accepted conception includes the U.S. states of Oregon, Washington, and Idaho and the Canadian province of British Columbia. 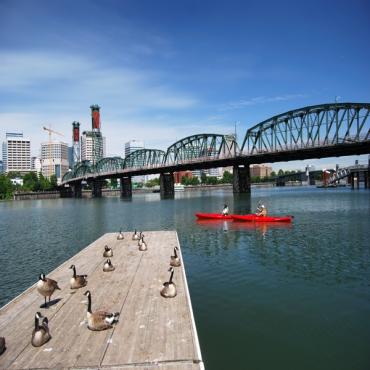 Welcome to Portland, the City of Roses.  The culturally rich downtown - the Pearl District - is surrounded by small, intriguing neighbourhoods, each with a unique flavour and heritage. The city has been dubbed the country’s best eating destination, America’s most sustainable city and more.

Portland is in the heart of the Pacific Northwest, a bioregion very distinct from the rest of the American West. It has the world’s largest cold jungle or temperate rain forest, alongside other wild landscapes, punctuated by Victorian villages and small seaport towns. You’ll be joining a long line of English visitors who have been travelling here since Sir Francis Drake landed in 1579. 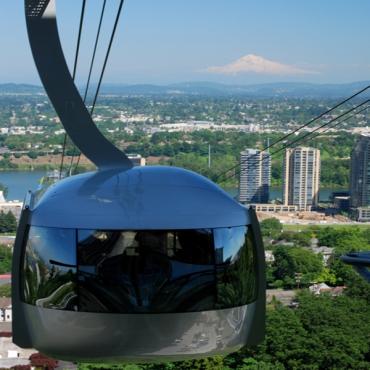 A second day in Portland gives you an opportunity to explore more of the world class collection of attractions. You can visit Asia without crossing the Pacific Ocean at the classic Lan Su Chinese Garden and Portland Japanese Garden, plus enjoy the blooms at the International Rose Test Garden.

Pittock Mansion was built by the local lumber baron who stripped the Pacific Northwest of forests. The natural resources were ultimately revived and preserved by the most environmentally conscious region in the country. The Oregon Museum of History and the Oregon Museum of Science and Industry tell the rest of the story. There are many great restaurants that surround Pioneer Courthouse Square. Musical performances, art shows, theatre and cultural highlights are a daily event. 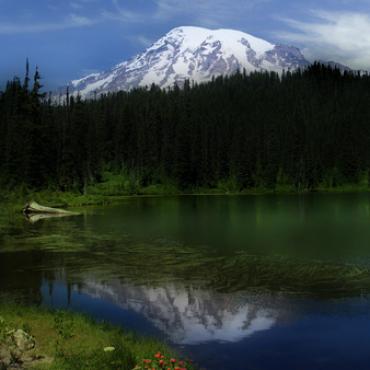 North of Portland, a very scenic side trip will take you to Mount St. Helens.

On Sunday, May 18, 1980, a massive avalanche of rocks and debris came crashing down on 230 square miles of forested land and changed the landscape forever. Photographs and exhibits at the Mount St. Helens Visitor Centre at Silver Lake, near the entrance to the Monument, introduce visitors to the Mount St. Helens story. State of the art interpretive displays at the Johnson Ridge Observatory magically portray the sequence of geologic events that transformed the area and the changes that have occurred since that time. You can learn more of the story at the Coldwater Ridge Visitor Centre. 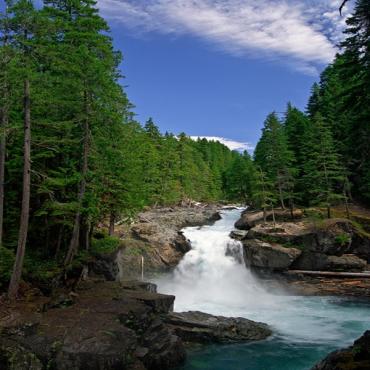 Magnificent Mt. Rainier, an active Cascade volcano encased in over thirty square miles of snow and glacial ice, is the highest peak in Washington. Walk in the footsteps of the many explorers who climbed Mt. Rainer. Explore glaciers, discover life in the rain forest, hike the Wonderland Trail, experience sub-alpine ecology, watch clouds shroud the mountain, meander through old growth forests dating back over 200 years, visit rustic historic buildings and listen to glaciers crack. 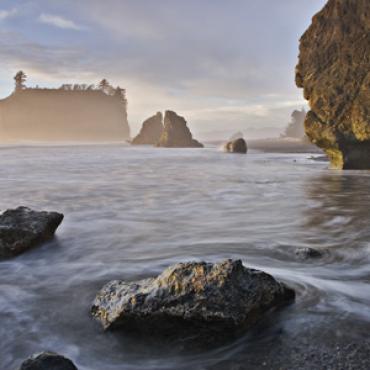 Olympia and Aberdeen are the gateways to the Olympic Peninsula. Halfway in between Mt. Rainier and Aberdeen, you can visit Olympia, Washington’s State Capitol. Thirty acres of immaculately landscaped rose gardens surrounding the Capitol Building make this one of the most beautiful capital districts in the country. The State Capital Museum, located in the historic Lord Mansion, interprets the history and culture of Washington beginning with the region’s Native Americans. Beautiful gardens also surround this museum.
After a scenic drive between Olympia and Aberdeen, you’ll reach the Pacific Ocean and the true gateway to the Olympic Peninsula. Tomorrow, you will begin exploring the dramatically varying landscapes of the Peninsula which are dressed in endless lush variations of green. 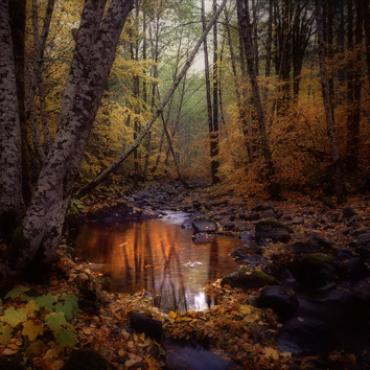 The diverse blend of climates and natural wonders of the Olympic National Park encompass nearly one million acres of the Olympic Peninsula. As you navigate the Peninsula loop drive, the landscapes changes seamlessly from primeval rain forests, subalpine meadows, and glacier capped mountains to clear running streams, sandy beaches and shoreline coast. Cultural diversity is present in the heritage of the original Native Americans who lived in the area, coexisting peacefully with fishing villages and a Victorian seaport or two. You’ll soon discover that this is one of, if not the, most naturally rich and varied region in the United States. You begin the drive in Aberdeen and end in Port Angeles, gateway to Olympic National Park. Take some time to explore both the Visitors Centre and the museum.

The scenic drive around the Olympic Peninsula is a virtual panorama of unfolding ecosystems, each a part of the greatest true remaining wilderness forest in America. The spectacular Olympic Mountains, the centrepiece of the Peninsula, form a circular range in the central area of the park. The ice and snow covered slopes are a great contrast to the deep green forested areas of the lower elevations. The Quinault Rain Forest, and the ever present mountains, are an even greater contrast to the miles of Pacific coastline that are part of the Park. Ruby Beach, covered with driftwood and rocks, features prominent views of the seastacks, remains of the headlands that used to be attached to the mainland and now protrude from the sea. Take a side trip to the Hoh Rain Forest visitors centre deeper in the interior of the Park, about thirty miles south of Forks, to learn more about the west valleys that are drenched in more than twelve feet of rain each year. 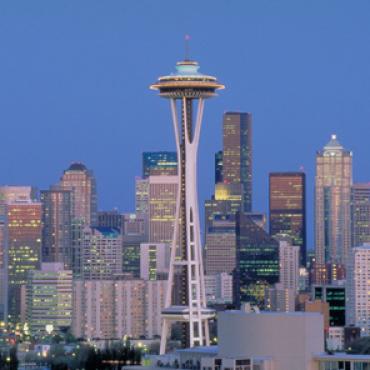 The city has seen gold rushes and labour strikes, business booms and busts, fires and earthquakes, only to bounce back even stronger. With the original descendants of the settlers now as entrenched in the Pacific Northwest as a red flannel shirt, Seattle has developed a rich and diverse multi-cultural mix that is overlaid with the sophistication brought by several of America’s largest corporations including Boeing Aircraft, Microsoft and Starbucks. It’s a short drive from Quinault to Seattle, leaving plenty of time to begin exploring this very special city.

If you didn’t have an opportunity yesterday, it’s time to scale the Space Needle, watch fish being pitched at Pike Place Market and explore, by Seattle Underground, sections of Seattle’s original downtown that were destroyed by fire in 1889.  Alki Beach, the original landing place of Seattle settlers, stretches for two miles along West Seattle. 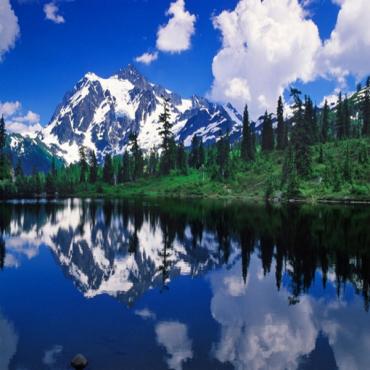 The National Geographic calls the North Cascades Highway, in Washington, one of America’s grandest and most spectacular drives. We’re confident you’ll agree as you travel over Washington Overlook Pass in North Cascades National Park and on to Chelan. The glaciers in North Cascades National Park are up close and personal, as are jagged peaks, deep valleys and cascading waterfalls.
The three million acre preserve was specifically established to protect the snowfields, glaciers, and alpine meadows of the high mountain country from lumbering operations, leaving a pristine road less travelled for visitors to enjoy. For a break, stop in Winthrop which looks like it just stepped out of a Western movie set. 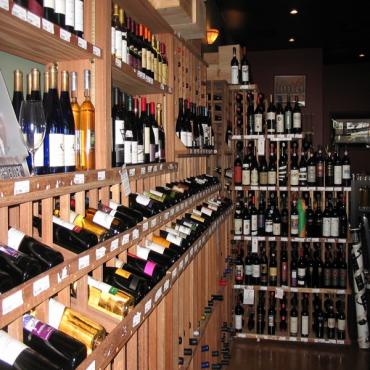 Driving south from the Cascade Mountains, you’ll reach Yakima, Washington, the wine capital of Washington State. Winery-hopping in the Yakima Valley can be a surprising delight!  The sun-soaked Washington wine region is at the same latitude as the great wine-producing regions of France, producing magnificent vineyards laden with rich grape varietals. 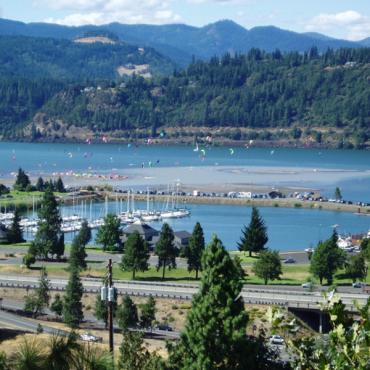 On your way from Yakima to The Dalles/Hood River area, take time to explore Toppenish, where historic murals reveal the story of the city’s heritage. From there you have the option to travel straight south to The Dalles or go to the Tri-Cities, Walla Walla and other points east before turning south. Either way there are wineries and other places to visit along the route. 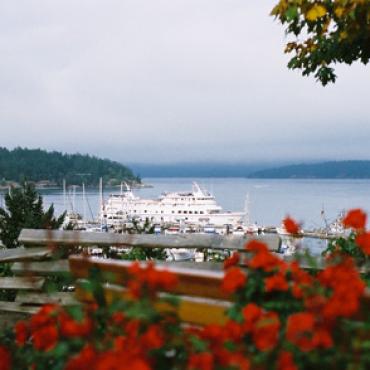 Meander through unforgettable scenery and lose yourself on the road less travelled. Drive along the Columbia River Historic and Scenic Highway and you’ll be taking the old road; the one with the most spectacular scenery, the highest waterfalls and the best views of the Gorge.
Stop for a leisurely lunch at the edge of the Gorge and savour the area wines and wonderful views. Some consider the natural beauty of this road the best in the US. It’s a great way to wrap up your inspiring trip through Oregon. 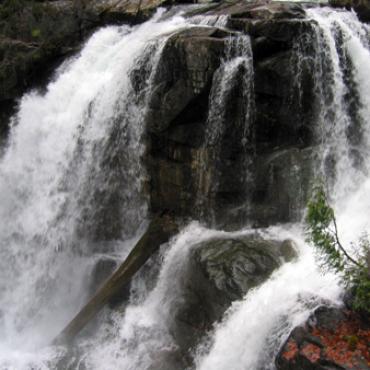 One last morning of the Pacific Northwest's dramatic natural scenery before heading home.

However, your journey does not have to end here. Why not extend your stay and continue down the Pacific Coast or perhaps cross the border into Vancouver, Canada?