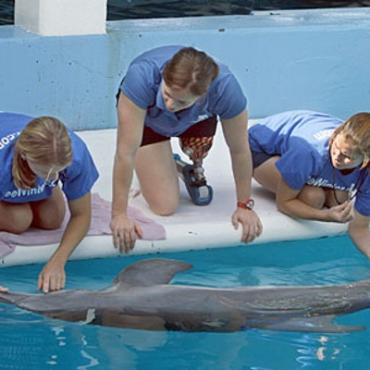 Clearwater Marine Aquarium is a unique facility, specialising in the rescue, rehabilitation and release of sick or injured marine animals. All the animals that come through their doors arrive because they were suffering from an illness or severe injury in the wild.

Once the animal arrives at the hospital, a team of experienced biologists, veterinarians and volunteers create a rehabilitation plan for the animal specifically catering to its injury or illness. If the animal is unable to be released back into the wild, it becomes a permanent member of the CMA family and lives there as an ambassador for their species to help promote environmental conservation.

CMA is home to Winter the dolphin – possibly the most famous dolphin in the world!

At only three months of age, Winter found herself wrapped tightly in a crab trap line and was unable to escape. Unfortunately, Winter lost her entire tail as well as two vertebrae as a result of the serious injuries that she had sustained. Despite the odds against survival, Winter has done amazingly well, she has completely healed, adapted to a new swim pattern, and learned to eat fish on her own…about twelve pounds a day! With the aid of a prosthetic tail, Winter is re-learning how to swim again in an up and down fashion and counter some of the behaviours she gained as a result of her injuries.

See Winter and her dolphin friends during daily shows as well as a host of interesting exhibits and sea animal viewing areas. This is definitely worth a visit and somewhere the whole family will enjoy.