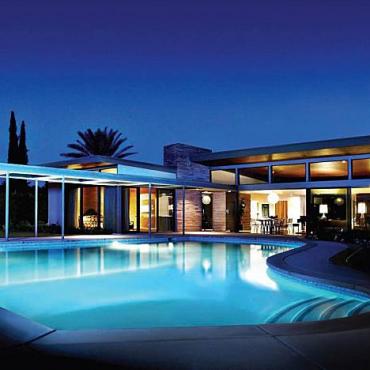 What many may not realise is that Frank Sinatra called the Palm Springs Desert Resorts area home for nearly 50 years – from his arrival in the late 40s through his final days. Today, from his mid-century modern Palm Springs home and Rancho Mirage compound, two restaurants and landmarks throughout the desert, the public can still glimpse places owned and frequented by The Chairman of the Board in this beautiful California desert paradise.

According to Palm Springs-based writer Howard Johns, these are the 10 top places in the Palm Springs area not to be missed by any Sinatra fan - 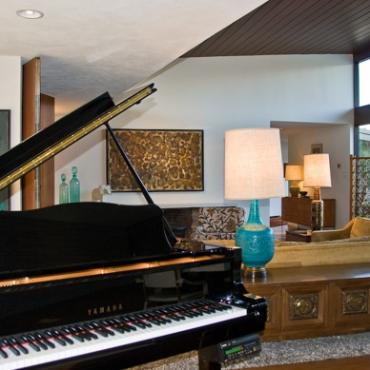 Twin Palms Estate: Sinatra had this mid-century modern jewel built in 1947 by award winning architect Stewart Williams. The property boasts four bedrooms, seven bathrooms, a state-of-the-art (by 1947 standards) sound system, movie projectors, and sound recording equipment for guests’ enjoyment. Huge sliding glass doors open onto an expansive backyard patio leading to a cabana, the two signature “twin palm” trees, and a piano-shaped swimming pool. Visitors revel in the property’s Sinatra history – right down to the crack in the bathroom sink caused by a wayward champagne bottle, said to be tossed at Ol’ Blue Eyes by an incensed Ava Gardner. The property is open to a select few Tuesday-Thursday and may be rented for private parties or personal stays. Please call Bon Voyage for further details.

The Compound – (70-588 Frank Sinatra Drive, Rancho Mirage) – This sprawling 2.5 acre residence was built in 1954 and includes a main house, movie theatre, five guest houses, an actual train caboose turned into a barbershop and sauna, two swimming pools, tennis courts, and a personal art studio. Each building was named after one of his songs: “New York, New York,” “High Hopes,” “The Tender Trap,” “Send In the Clowns,” “Chicago,” and “My Way.” The Compound includes the famous guest quarters built in 1962 for (but never used by) JFK, and a helicopter landing pad in the circle drive, later turned into a flower garden. While Sinatra fans cannot enter The Compound (it was sold in the late 1990s and is privately owned) it remains to be one of the most popular drive-by addresses for carloads and busloads of tourists who visit the desert.

Frank Sinatra Drive (Rancho Mirage) – Easily one of the most recognised street names in the Palm Springs area (although Bob Hope, Gerald Ford, Dinah Shore, and Kirk Douglas also have been given the honour), Frank Sinatra Drive begins at the hilltop entrance to The Ritz-Carlton, Rancho Mirage, continuing about 8 miles east where it comes to rest at the far edge of Palm Desert. Visitors who travel its path will pass the legendary Tamarisk Country Club, Former Ambassador to the Court of King James Walter Annenberg’s “Sunnylands” Estate (still surrounded by a bright pink wall, painted as such at the insistence of Mrs. Annenberg), Wolfson Park, where one can still hear a recorded “welcome” to the park speech by Sinatra himself and, of course, Sinatra’s famous compound. 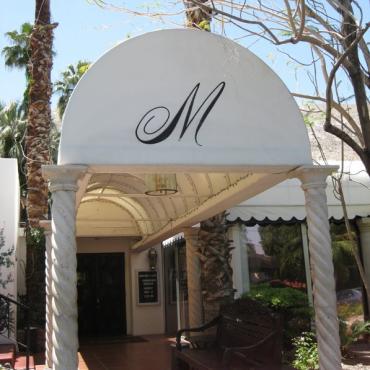 Melvyn’s Restaurant & Lounge at The Ingleside Inn (200 West Ramon Road, Palm Springs) – This now legendary hotel and restaurant was the site for Sinatra’s pre-wedding dinner to Barbara Marx in 1976. Owner Mel Haber, who still greets guests daily at the Inn and restaurant, remembers: “Sinatra invited 80 people. Made all the arrangements himself. He was very meticulous in his selections – he chose the veal and vegetables.” Melvyn’s was also a favourite hangout for Sinatra and buddies Jilly Rizzo, Pat Henry, and Danny Schwartz, who would hang out in the bar and drink Jack Daniels.
Riccio’s (1900 East Palm Canyon Drive, Palm Springs) and Lord Fletcher’s (70-385 Hwy 111, Rancho Mirage) – Two of Sinatra’s favourite hangouts, Riccio’s (now Club Trinidad) was for years a Rat Pack hangout for Frank, Sammy, and Dean. Owner Bobby Riccio remembers: “Sinatra usually arrived with an entourage, ordered steak and peppers, and stayed to watch the floor show. One time he flew in from Las Vegas with Bob Newhart and Don Rickles, just to eat dinner.” Lord Fletcher’s was for Sinatra’s quieter, more personal times. He dined there for more than 30 years and made it the site of his 70th birthday celebration in 1985. Manager Michael Fletcher remembers, “He liked the casual atmosphere. He could be himself and nobody would bother him.” 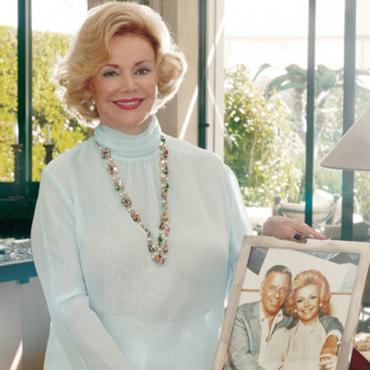 Barbara Sinatra Children’s Center (39000 Bob Hope Drive, Rancho Mirage, on the Eisenhower Medical Center campus) - Founded in 1986 by Sinatra’s wife Barbara, the $2.5 million, facility continues to be a national leader in the treatment of child sexual abuse. The annual Frank Sinatra Invitational Celebrity Golf Tournament (www.sinatragolf.org) raises money for the Center, with a star studded gala that attracts more than 1,000 players and fans from around the country. 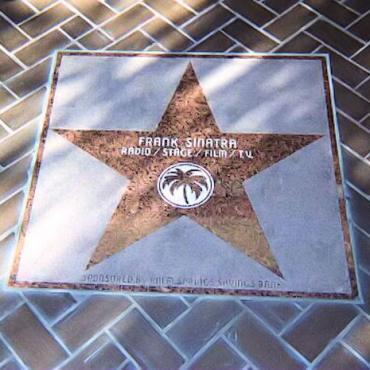 Sinatra’s Star (123 North Palm Canyon Drive, Palm Springs) – Sinatra is forever remembered on the Palm Springs Walk of Stars, which lines the east and west sides of Palm Canyon Drive in downtown Palm Springs. Coincidentally, Sinatra’s star is located at the entrance to Desert Fashion Plaza, where Chi Chi – easily one of Palm Springs hippest nightclubs in history – once stood. The star was presented to Sinatra on January 15, 1994, in honour of his outstanding achievements on the stage, in the movies, and on TV and radio. More than 2,000 people showed up to pay their respects, and traffic stopped dead in the street upon the arrival of The Chairman of the Board. 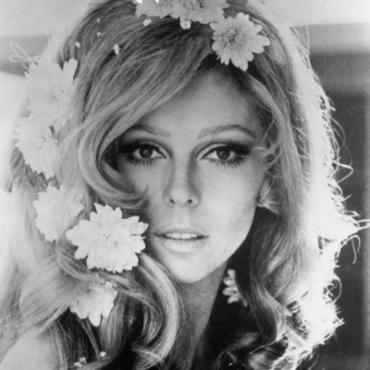 St. Louis Catholic Church (37-220 Glenn Avenue, Cathedral City) and St. Francis of Assisi Church (47-225 Washington Street, La Quinta) remain today as two houses of worship supported by Sinatra and his family. St. Louis Catholic Church, once frequented twice a week by Sinatra’s devoutly religious mother, Dolly, is still known as “The House That Dolly Built,” because of her many financial contributions. Sinatra’s daughter Nancy (“These Boots Were Made for Walk’n”) held her second wedding there in 1970.  St. Francis of Assisi, built in 1974 and designed by famed Italian opera director Franco Zeffirelli, was frequented by Sinatra himself, as well as fellow parishioner Frank Capra, who directed Frank in the 1959 movie, ‘A Hole In The Head 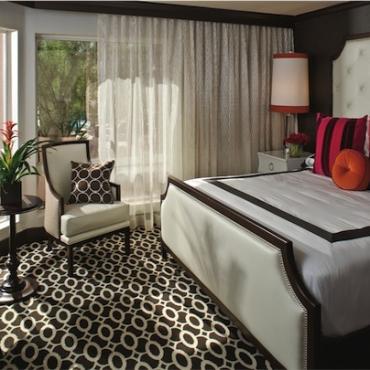 The Riviera Resort (1600 North Indian Canyon Drive, Palm Springs) – was where Sinatra organized big charity shows featuring such fun-loving buddies as comedian Jerry Lewis and fellow crooner Bing Crosby. Crosby, a longtime Sinatra idol who owned a home at Thunderbird Heights in Rancho Mirage, today is the namesake for a restaurant chain of fine, vintage-era restaurants and clubs. The Rancho Mirage “Bing Crosby’s” sports a huge mural on the front of the building, which depicts a dancing and singing Bing, Grace Kelly, Louis Armstrong, and of course, Frank Sinatra.

Desert Memorial Park (69-920 Ramon Road, Cathedral City) – The final resting place of Ol’ Blue Eyes. Sinatra’s body was buried at the Park in a family plot next to his parents. His grave is located near the entrance in front of the waterfall. Frank’s closest friend Jilly Rizzo, his uncle Vincent Mazzola, and composer Jimmy Van Heusen are buried close by. Hundreds of Sinatra fans make the vigil to Sinatra’s burial spot each year to pay their respects. His simple headstone, which reads, “The Best Is Yet to Come,” is almost always adorned with fresh cigarettes, dimes (a favourite giveaway of Sinatra’s, as a reminder of tougher times), and often, mini bottles of Jack Daniels.

Let Bon Voyage arrange a Frank Sinatra inspired holiday in Palm Springs for you. Perhaps you'd like to grab a few friends and stay in his plush, and now extremely retro home in Twin Palms Estate. Or would you prefer a break in the tropical Riviera Resort? Call Bon Voyage to discuss your Palm Springs holiday options.