Palm Springs and the Desert

Only a two hour drive from Los Angeles, holidays in Palm Springs offer the chance to experience dramatic and stunning desert scenery without leaving city comforts behind. With a warm and dry climate 350 days a year, it's a perfect relaxing year-round destination to escape the hustle and bustle of LA.

Located in the Coachella Valley at the foot of the San Jacinto Mountains, Palm Springs truly is a virtual oasis, sheltered on three sides by mountain ranges and bordered to the east by the great Colorado-Sonoran Desert.

Here you'll find designer shopping, 116 golf courses, top class shows, a wide choice of eateries (we love the authentic Mexican food here) and world class hotels all set against an amazing backdrop. If you can Plan your visit to Palm Springs between May-September as Americans tend to avoid this period, hence quieter time and potentially better prices.

Surrounding Palm Springs are the smaller resort cities, which bask in the desert lifestyle: Desert Hot Springs, Palm Desert, Rancho Mirage, Indian Wells, La Quinta, Indio and Cathedral City. These areas are home to some incredible hotels and attractions.  Call us to discuss what area of Palm Springs would be best suited for you. 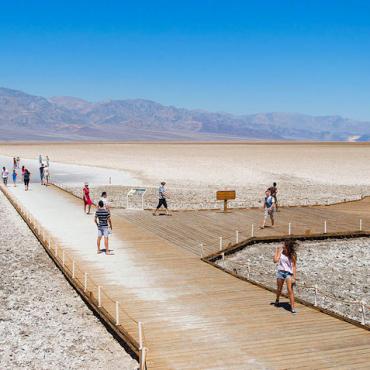 Straddling the California/Nevada border and the largest national park south of Alaska, Death Valley is known for its extremes. It’s North America’s hottest and driest spot, and has the lowest elevation on the continent at Badwater Basin, 282 ft below sea level. Named by gold prospectors struggling through this baron area in 1849, Death Valley has had many inhabitants including Native American Indians, Chinese immigrants and Japanese Americans who were interned here during World War I.

It’s an eerie but fascinating place with its sculpted rock layers forming deeply shadowed, eroded crevices at the foot of sharply silhouetted hills and their exotic mineral content turning million-year-old mudflats into rainbows of sunlit phosphorescence. Spend your time here discovering many unusual sights like Artist’s Palette, an eroded hillside covered in an intensely coloured mosaic of reds, golds, blacks and greens. The endless salt flats at Badwater or Zabriskie Point, one of the best viewing areas in the park.

In 2013 the International Dark Sky Association declared Death Valley as the world’s largest “international dark sky park”. With the park being enough distance from the large cities of the southwest, much of the night sky above the desert floor is near pristine and, in many places, offers views close to what could be seen before the rise of cities. Whilst you’re in the park check with the Tourist Information Bureau to see if any Park Ranger Night Sky programmes are taking place, these you won’t want to miss.

Nevada and 'The Loneliest Road'

As Chris Haslam wrote in the Sunday Times Travel section - 'If you consider yourself a traveller rather than a tourist, rev up for an adventure on the roads less travelled.'  Discover, not only, Nevada's Loneliest Road, but the eerie...

Ready for some earth shaking excitement? Climb aboard a Jeep or Hummer for an extraordinary tour through one of Palm Spring's most infamous attractions – the San Andreas Fault. This great fracture in the earth’s crust has created the...

The huge honeymoon house at 1350 Ladera Circle, was built in the early 60s in state-of-the-art, open-plan...

It is hard to believe that over two decade has passed since May 14, 1998 - the day the world lost the incomparable...

Palm Springs is the place to be for mid-century modern style and design, where carefully restored homes, hotels, and commercial properties designed by masters like Albert Frey, Richard Neutra, John Lautner, and William Cody are plentiful.

Only 45 minutes from Palm Spring lies Joshua Tree National Park established to preserve the groves of the unusual...read more

If you can drag yourself away from your poolside lounger, we've got to see experience the views from the top of...read more

A stroll down shop-lined Palm Canyon Drive will take you along the Palm Springs Starwalk..read more.

Enjoy dramatic glamour under the sun at this sensational and stylish boutique hotel.

Having just re-opened after an extensive renovation, The Colony Palms Hotel, has regained its swagger as a stunning four-star boutique.

The Westin is set in the exotic desert sanctuary of Rancho Mirage - 20 minutes from the buzz of downtown Palm Springs.

Nestled at the base of the majestic Santa Rosa Mountains in the exclusive community of Indian Wells, approximately 20 minutes from downtown Palm Springs.

Part of the Waldorf Astoria Collection, The historic La Quinta Resort & Spa, located 20 miles from Palm Springs is a legendary hideaway, renowned since 1926 for its charm and serenity.

Situated in a lush oasis surrounded by the vast and arid desert of Death Valley National Park.