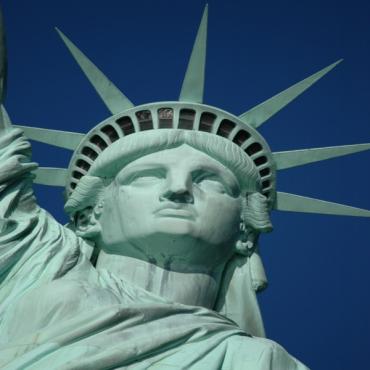 Possibly one of the most iconic symbols of America is located on Liberty Island in New York Harbor. Made of copper, the statue was a gift from the people of France to the people of the USA.  Lady of Liberty was designed by French sculptor Frédéric Auguste Bartholdi and built by Gustave Eiffel – yes, he of the Eiffel Tower. The statue was built in France then shipped overseas in crates. All the pieces were then assembled on the pedestal where it now stands and completion was marked by New York's first ticker-tape parade in 1886.

Ellis Island was the USA’s busiest immigrant inspection station from 1892 until 1954 and welcomed nearly 12 million immigrants from Europe to the New World. The island was made part of the Statue of Liberty National Monument in 1965.

Interesting fact; Ellis Island has long been accepted as being in New York state. However, as it expanded due to reclaimed land, the state of New Jersey filed a lawsuit that the island belonged to them. In 1998 the United States Supreme Court ruled that Ellis Island was in fact in New Jersey.

Today, visitors can take the ferry across to both Liberty and Ellis Islands for a variety of tours - including Lady Liberty's crown.  Advanced reservations are highly recommended and your Bon Voyage consultant will happily take care of the arrangements.