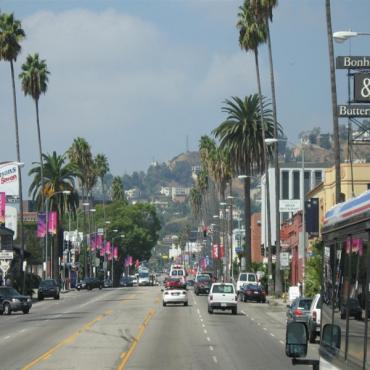 A visual cacophony of billboards, giant ad banners and neon signs, the sinuous stretch of Sunset Blvd between Laurel Canyon and Doheny Dr has been nightlife central since the 1920's.  Mobster Bugsey Siegel and his posse hung out at such clubs as Ciro's (now the comedy store), Marilyn Monroe had her first date with Joe DiMaggio at the Rainbow Bar and Grill, the Whisky A Go-Go gave birth to both The Doors and go-go dancing:and Led Zeppelin raced motorcycles in the Hyatt Hotel henceforth known as thr "Riot House".

Then in the late 90's, the strip captured the limelight again with the House of Blues, the ultra posh Skybar at ther Mondrian (you've got to check this place out) Hotel and the sexy Standard Hollywood Hotel.