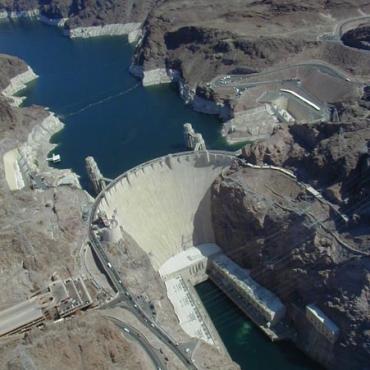 Hoover Dam, located 30 miles southeast of Las Vegas, straddles the mighty Colorado River, which forms the border between the states of Nevada and Arizona.

Considered to be the world’s largest dam and an engineering marvel at the time of its construction in the 1930s, Hoover Dam brings much needed water and power to the Southwest.  Now a National Historic Landmark, Hoover Dam has offered tours since 1937 and is open daily with the exception of Thanksgiving and Christmas.

Visually stunning, in an almost surreal way, it’s not just the dam’s immense size and its huge hydroelectric generators, but also the elegant Art Deco designs on the four towers, spillways, and power plant that will intrigue.

The Nevada side plaza features two Modernist-style bronze sculptures called the  Winged Figures of the Republic and a polished terrazzo floor. Here you’ll also find a plaque commemorating the 96 workers who died during the dam’s construction. Contrary to a popular myth, however, no workers are buried in the dam’s concrete.