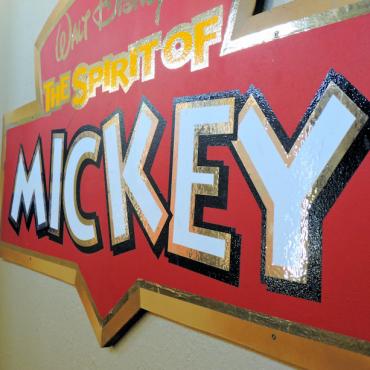 Just three hours west of St Louis, the quaint, friendly Missouri town of Marceline is where Walt Disney spent many of his boyhood years. This small railroad town inspired a lifelong fascination for him and by the time Walt had his own family, it fuelled his vision of Disneyland as a place to spend quality time with his daughters.
Born in 1901 in Chicago, Illinois, Elias Disney moved his family to a farm in Marceline in 1905. It was in Marceline that Walt's wild imagination was first ignited when he attended a performance of Peter Pan at the local elementary school..

During the 1920s, in Los Angeles, Walt made his first animated film featuring the barnyard animals from his beloved hometown.  At the time, he wrote to the Marceline News declaring “To tell the truth, more things of importance happened to me in Marceline than have happened since – or are likely to in the future.”
In 1948 he released one of his favourite films 'So Dear to My Heart' and noted "Why, that’s the life my brother and I grew up with as kids in Missouri.” 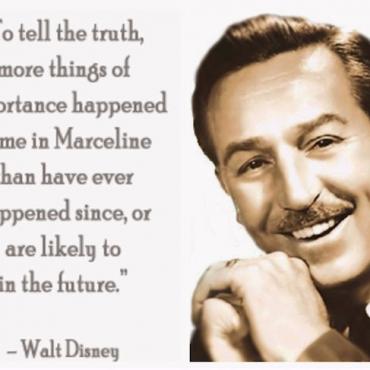 Disneyland opened its doors to the adoring public in 1955 and Walt's fond memories of Marceline led him to create the iconic glimpse of Americana known as 'Main Street, USA' as the welcoming entrance to this fantasy land. A year later Walt had the idea to purchase his boyhood home and farm to develop a rural experience around it, sadly he died before this was achieved. In 1960 Disney returned to Marceline to dedicate the Walt Disney Elementary School, travellling with one of his artists who adorned the walls of the school with Disney murals. At the dedication he proclaimed "“I’m not a funny guy, I’m just a farm boy from Marceline who hides behind a duck and a mouse.”


Thirty-five years after Disney’s death, the long-time wish of the Disney family to open a Walt Disney Hometown Museum in Marceline finally happened. Walt's sister, Ruth Disney Beecher donated many family artifacts to this museum after she passed away, all of these can be viewed today in this fascinating peak in the Disney family's colourful life.

To include Marceline and The Walt Disney Hometown Museum in your fly-drive holiday of Missouri contact the USA experts at Bon Voyage, or click here for further suggestions.