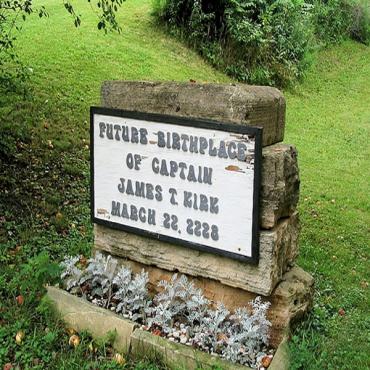 When it comes to thinking up novel ways to boost the local economy, some people are just more creative than others. A plaque behind a former barber’s shop marks the spot where James T. Kirk, captain of the star ship Enterprise, will be born March 22, 2228.

It is rumoured that the town wanted to put up a bronze statue of the daring Captain, but Paramount Pictures, the owner of the Star Trek rights, demanded $40K to license the image. Undaunted by this small setback, a scale model of the "USS Riverside," which some may argue bears an uncanny resemblance to another more famous craft, sits proudly in the town square.

The town’s annual festival is now dubbed “trekfest” and the town is "invaded" by many people wearing Starfleet, Vulcan and Klingon uniforms. During 2008 the town dedicated its new museum, the “Voyage Home Riverside History Center”, and actor Walter Koenig who played Pavel Chekov was on hand to thrill the crowds. Live long and prosper!