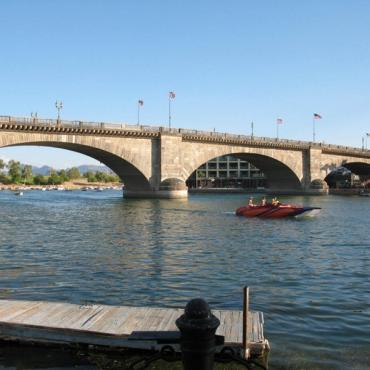 Lake Havasu was made dramatically more interesting when London Bridge was moved from London to the lake. The bridge, the only thread across the River Thames for nearly four centuries, witnessed phenomenal history over the years. The head of William Wallace was the first to appear on a post on the bridge in 1305. It took until 1967 for the entire bridge, which by then had been replaced in portions several times, to be declared superfluous and put on the market. The London Bridge Historical Ghost Walk reveals the ghosts, the bones and the people of London Bridge.

Today, Lake Havasu is much more than its famous landmark. With more than 300 days of sunshine per year, Lake Havasu is ideal for water sports, golf, tennis and desert tours. A bit more than 400 miles of stunning coastline delivers exceptional water skiing, kayaking, fishing, and house boating. The lake can also be explored from its beautiful beaches and hiking trails along its perimeter.