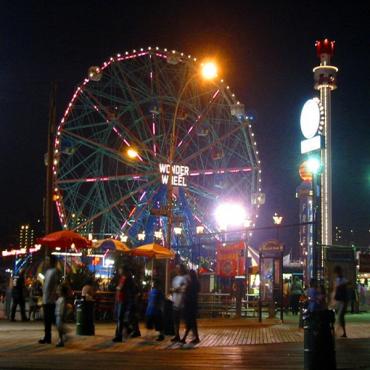 Coney Island Park, located at Brooklyn's southernmost tip, remains to this day an attraction loved by locals and tourists alike.  It reached its amusement park and resort heyday in the early 20th century and then suffered a major decline after World War II.  Today, Coney Island is once again an iconic Brooklyn favourite.  Grab a famous Coney Island hot dog and hit the beach and amusement rides for a day of fun!

The Cyclone rollercoaster built in 1927 is considered by many rollercoaster aficionados to be the best wooden rollercoaster in existence.  The Coney Island Aquarium offers various educational programs and tours and is noted for its Beluga Whales.  There are also a myriad of kitsch and quirky shows and attractions like the Circus Sideshow and the Mermaid Parade.

Definitely worth seeing at least once!