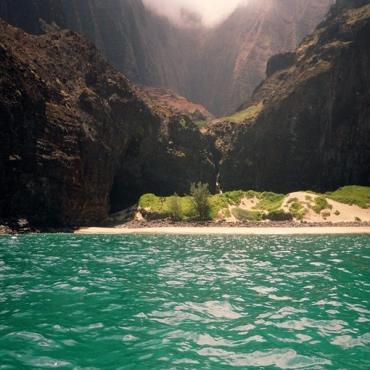 Relax on deck and gape at the incredible Na Pali coast made up of a series of "hanging" and traditional valleys and cliffs. A "hanging" valley is one that ends abruptly at a sea cliff rather than gently stretching out into the ocean. They are formed when the ocean's waves cut away at the lava rock quicker than the interior streams can scour out the valley floor. They look like huge folds of velvet, you'll feel that you can reach out and stroke them!

Many movies such as The Thorn Birds, Pirates of the Caribbean, Jurassic Park and portions of South Pacific, have been filmed along this coast using the dramatic background of these steep cliffs. Numerous sea caves, small golden beaches and high waterfalls add to the beauty and uniqueness of this landscape.

If you haven't got good sea legs, then we suggest you take a helicopter tour over the coast and the surrounding valley.  Call Bon Voyage for prices and further details.