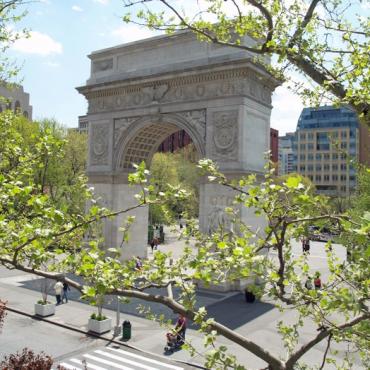 This stroll through the winding, twisted streets of Greenwich Village takes you to sights including Washington Square, New York University, Sheridan Square, Our Lady of Pompeii Church, and the folk music clubs of Bleecker Street. Named after the father of American Poetry, this tour will explore the origins of the neighborhood that became the incubator for the art movements in the United States, from American Literature, Theater, stand-up comedy, and classic rock.

During the 1960s folk music scene, artists such as Barbara Streisand, Peter, Paul, and Mary, Simon and Garfunkel, Jackson Browne, Joan Baez, The Velvet Underground, Richie Havens, Tom Paxton, Jimi Hendrix and Nina Simone all began their careers in the local nightclubs, theaters, and coffeehouses of Greenwich Village. For well over a century, 'The Village' has nurtured struggling artists, writers and musicians from Edgar Allan Poe to the Beat poets to Bob Dylan. These days no penniless artists could afford to live in the beautiful brownstones along the tree-lined streets. But look carefully and you can still find traces of the old 'bohemia'.